So my husband and I have been trading off days home with a sick 4-year-old all week.

She coughing, running a fever, not eating, sleeping tons but still exhausted, and is just generally miserable.  The doctor assures us it’s viral and said to come back in a few days if things weren’t looking up.  So we’ll be seeing her tomorrow 🙂

So I’m working from home while tending to a sick child.  And watching an awful lot of children’s television.

We’ve run the Dora, Diego, Max and Ruby gambit.  But have also (thankfully) glommed on to Rise of the Guardians which we’ve been watching on repeat courtesy of Netflix. 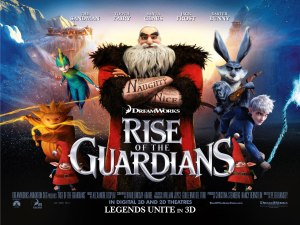 Is that not the coolest tattoo ever?! Photo courtesy of http://kidfocused.com/wp-content/uploads/2012/11/rise-of-the-guardians.jpg.

If you haven’t seen this movie, seriously, go watch it now.  It TOTALLY makes you nostalgic for all the beliefs of childhood.  AND has the BEST. VILLAIN. EVER. (except for Ursula. ‘Cause she rocks).

After posting this, I also discovered they have a hashtag! #RiseOfTheGuardians.  Which is just ten shades of AWESOME.  So I tweeted again (’cause I’m cool like that.  And starting to go stir crazy):

Watching #riseoftheguardians for the 3rd time in as many days w/my sick 4-yr-old. New favourite over here @guardians_rise

And they made me a top tweet!  I’m not sure what that means, but it sounded important and stuff, so I got all Twitterpated.

But we should move along to the point (because I totally have one).

As I sat through (this admittedly awesome) movie for the third time – despite my suggestions that we try something else – I remembered how I always use to love watching stuff again, and again, and AGAIN, AND AGAIN as a child and I got to thinking about what some of my childhood favorites were.

And then I saw the prompt for this week’s Finish the Sentence Friday:

One of my favorite childhood memories is …

And my answer (given my current frame of mind)?

So I give you here, my contribution to the Finish the Sentence Friday Hop.  Do see what the others have posted and swing by and say hello to the hosts at Janine’s Confessions, Can I Get Another Bottle of Whine, Finding Ninee and Mommy, For Real.

Yes.  Like my daughter, I too once had a developmentally age appropriate hankering for repetition.  And there are four movies I remember watching on repeat for YEARs.

I don’t want to leave you with the idea that the television is my bestest childhood memory (mostly because I love my parents, and this would horrify them).  I have many great ones.  Heck! My parents took me to Africa.  Three times (to visit family).  We did Disney.  Twice.  And organized sports.  And family resorts.  But this week?  I remembered the warmth, and comfort, and happiness, and feeling of family and familiar and HOME that watching the following four movies brought me as a child.

Number 1 – The Raccoons and the Lost Star

But The Raccoons and the Lost Star was the one on forever repeat chez nous.

Okay – so quick premise. [Spoiler Alert!]  Shaeffer the Sheep Dog is playing with his owner’s two kids – when their dad calls and says he has a surprise for the kids.  Shaeffer does what all good dogs do at this stage and takes a nap.

He’s woken up by the glowing lights of a plane.  He goes and explores, but is interrupted when the pilot (also a dog, don’t question) is “called back to base”.  Shaeffer, most logically, hides in the backseat of the plane and is taken to a jungle planet.  There, he’s chased off the scary military base by the forces of the Imperial Commander Cyril Sneer.  He runs into his friend, Sophia Tutu, but she doesn’t know him.  She takes him to meet her puppy Broo, who wears a magic star around his neck – the same star that Cyril needs to conquer Earth!  So Cyril is hunting for it.

Anyway, Shaeffer, Sophia and Broo fall in with the Raccoons (Ralph, Bert and Melissa), who are the only three animals left in the jungle.  In a WILD “Luke, I am your father” soap-opera-like plot twist (which isn’t a total shocker as this was apparently somewhat based on Star Wars), we soon find out that Sophia’s boyfriend Cedric is really Cyril’s son.  But the crusaders make that work for them, he feeds them some crucial info and, after a few more shenanigans, good prevails!

Then Bert flies Shaeffer back to earth where Shaeffer awakes from his dream to find out the surprise is their new puppy Broo!

The other thing I remember about the Raccoons generally, is the music that went with it.  And after surfing for a bit, I have to say it’s quality music that stands the test of time.  The video below is a sample from the movie.  But here’s Rita Coolidge’s “Lake Freeze” from The Christmas Raccoons (I dare you not to cry) and here’s the theme song to the TV Show “Run With Us” (very ’80s, but fun!).  Maybe I’m suddenly jonesing from missing this week’s Twisted Mix Tape Tuesday, but the quality looking back tonight surprised me – given it was soundtrack to a cartoon.

Okay – so to quickly situate you, after that incredibly humorous to some and embarrassing to George Lucas Star Wars Christmas Special, there were two made for TV Ewok movies in the early 1980s.  Courtesy of the interwebs I’ve just learnt this one made it to theatres in Europe under a slightly revised name, but over here we recorded it onto VHS off television and watched it over and over again so much so that I can quote the commercials.

Plot summary:  The Towani family’s starcruiser crashes onto the forest moon of Endor.   The family – comprising of Catarine, Jeremitt and two children: Jeremitt (early teens) and Cindel (6ish – I wanted to be her) are stranded.   The parents vanish and the kids are found by the Ewoks and taken in.  What child wouldn’t think it was awesome to live with the Care Bears, I mean the Ewoks?

Together they rescue Jeremitt and Cindel’s parents from the evil Gorax!  But the family is still TOTALLY stuck on Endor with their broken starcruiser.  Whatever will they do?

Well!  Like any good franchise, they’ll make a sequel!

This one was a wee bit less about frolicking with teddy bears and had a bit more adult content, so probably best it didn’t hit until I was 8 and my younger brother was, well, 5.  He turned out just fine, so no worries.

Are you glued to your seat?  Wanting to know if they got off the island (so speak)?

Plot summary: The Towani family almost has their starcruiser fixed and so can almost leave Endor when the Ewok village is attacked by Terak, the witch Charal, and their henchmen.  Many Ewoks are killed, along first with Catrine (mom) and Mace (brother).  Jeremitt tells Cindel to run and rejoin the Ewoks before he too is killed.  But then Cindel is captured by the witch, who has also captured Cindel’s Ewok friend Wicket.

They both manage to escape and find Teek – and odd little creature – who brings them to Noa, a bitter human who, after some drama, gets over himself and becomes like a father to Cindel and totally helps them save the day.  Sure, there’s intrigue and stuff before that, but I don’t want to ruin EVERYTHING for you!  But [spoiler alert!] in the end, Cindel and Noa successfully leave the forest moon for home!

As a point of interest before moving on, I have to say that I remembered these two movies from my childhood as being wonderful and awesome.  I then watched them again in my early 20s and realized they hadn’t quite stood the test of time in the way the original Star Wars movies had managed to.  It was a sad moment.  I’m hoping maybe I’ll find them again at a moment of now lowered expectations and re-discover the magic they made me feel.

So this brings me to the last pick from my early childhood repeat list.  I realize I should have five.  Lists generally seem to come in fives.  But I really don’t have five.  For number 4 I give you:

I don’t really feel it needs a plot summary.  But if you really aren’t familiar, check the link above.

I have to admit, I didn’t realize how often I’d seen this movie until I caught it on television in my late 20s and talked along with it verbatim for the first 20 minutes (until my husband told me to stop).

But I remember watching it as a child.  We use to have movie rental nights as a family.  My folks made it a bit of an event.  We’d go choose the movie from the rental store and then all settle in with popcorn and such to watch.  I REMEMBER when we watched this one.  I also remember it because it’s the beginning of one of those “family lore” moments.  We hit the part where Venkman says “Let’s show this prehistoric bitch how we do things downtown!” While the Ghostbuster’s proceeded to save the day, my 5-year-old brother asked my parents what “prehistoric” meant.  They explained it meant old [apparently by 5 he already understood that “bitch” meant the prehistoric lady in question].

So, in the world of “be careful what you say to your kids” we all go to dinner the next day at my grandparents and he greets granny by saying “Hello you prehistoric bitch!”  After a wee bit of explaining I understand she got over it.

But enough about my brother.  As for my most memorable moment from the movie?  I always loved Ray’s choice for the “form of the Destructor”! Or as he said, “the most harmless thing”: Mr. Stay Puft.  So here you go:

So there you have it.  As I hunker down in preparation for our fourth day home with a sick child and brace myself for a day of Dora and Diego in the background interspersed with very long naps and, most likely, another viewing of Rise of the Guardians, I hope you’ve enjoyed my journey down Childhood Movie Memory Lane.