My husband has taken my eldest for a haircut.

My youngest is asleep.

All is quiet in the house.

It is my time.

So I’m linking up for my weekly mood boost over at Lizzi’s weekend Ten Things of Thankful Blog Hop.  Each week she asks you to list ten things from your week you are thankful for.  Check out the others here.  Really.  Take a moment.  Make your heart smile: 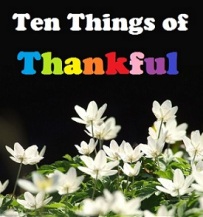 I’m thankful for perspective.  Because honestly?  It was a rough week.  I woke up Monday to discover I had food poisoning, so on top being basically incapacitated in bed and on the couch for most of the day, I also missed work at the start of what was a very busy week.  Got to the office Tuesday (still feeling rather squeamish) to learn that we’d be down a team member for two weeks due to Jury Duty.  Wednesday saw another team member go down with stomach flu for two days (and then there were three).  My blackberry basically stopped working on Wednesday (in that the keyboard is jammed so I can’t type or get into it anymore because I can’t enter my password).  Given people tend to send urgent pins, this is less than awesome.  IT will get to it sometime next week (given that it has now been flagged “high priority”).  Given most work days were stretching until about 6:30, by mid-week, the mornings would start with my 4-year-old asking if I was coming home that night.  Always nice to start the day with positive reinforcement as to how successfully one is balancing career and children!

But then, as I mentioned, there’s perspective!  Just when I needed it, the universe popped in to remind me – through the example of another – that it could be worse.

I could be Gwyneth Paltrow.   She recently commented to E! how tough it is to be a mom and an actress, noting how much easier it is to balance a 9:00-5:00 office job with raising kids.  I could continue to thank Gwyneth for helping me realize my good fortune as compared to her lot in life, but I think Mackenzie Dawson of the New York Post really sums it up.

Much love for this: A working mom's open letter to Gwyneth http://t.co/Y4B0zHQva0

I woke up this morning to three text messages and two voicemails on my phone from around 12:30am to the effect of “Lindsay’s waiting for you at the door of the museum, where are you?!”  My favourite was the voicemail from the security guard at, I presume, the museum for the monthly Nature Nocturne event informing me he had “my daughter”, she was okay, but that I should really come and pick her up soon.

Given my daughters are four and almost two, and we were all in bed for a good couple hours by this time, I missed all this and really hope Lindsay’s mom arrived to pick her up.  I’m thankful this is one parenting issue I don’t currently have to deal with.

I’m thankful that for my mom and the fact that she babysat for us twice this week – once when both my husband and I had to work late and once so my husband and I could go out.  At the same time.  Together.  Like, on a date.

Okay, so it wasn’t really a date.  But I’m thankful that one of those babysits was so my husband could join me for the annual Carleton University Varsity Banquet.  Our athletes had a great year and for the first time, I believe, in their history, they won TWO national championships this year: Men’s Basketball and Women’s Curling.  This year also saw the return of football.  Go Ravens.

I’m also thankful for the fun dinner conversation at the banquet and thankful that, as a result, my husband wasn’t bored.  I’m thankful he sat next to two students who also happened to be Canadian Armed Forces Reservists.  Both my husband’s brothers served so they chatted happily about all things military for most of the evening.  As for me?  In chatting with others at the table, I’m thankful for learning a fun new term: Dino Dad.  Two of the professors at our table both claimed this title – as they were in their 50s with very young children.  I’m now curious if the term “Dino Dad” is a thing.  Further investigation is required.

I’m thankful that after a chaotic week and finally getting out of the office at 6:30 last night, my husband (who was waiting for me to get home before he could go out with friends) was fine being (even) late(r), so I had time to go pick up a much-needed bottle of wine, take out pizza and Frozen again from the Movie Rental Store.  I’m extra thankful Frozen was a) available – because I’d promised the girls we’d watch it and do movie night again and b) they let me take it out even though I forgot to return 101 Dalmatians and so it was overdue.  The awesome folks at Movies ‘N Stuff just extended that rental so I could return it with Frozen today AND I was able to meet my deliverable of Frozen movie night with the girls.

I’m thankful to have successfully achieved this S.M.A.R.T. objective as evaluated against the following performance indicators:

In unrelated news, our learning plans and work objectives for the year are due at work on Monday.

I’m thankful for Netflix and the predictability of daytime television.  While I was home sick Monday, I rediscovered the fact that, somewhere on TV, there is ALWAYS a Criminal Minds or Law and Order episode playing somewhere.  Inability to move on Monday also gave me the chance to get re-acquainted with Season Two of the Vampire Diaries on Netflix.  Yeah brain candy.

Caroline and Elena from the Vampire Diaries dancing it up. Also kind of how I picture Lindsay from #9 circa 11:30 last night. Photo from here: http://weheartit.com/entry/108565634/via/anais76?utm_campaign=share&utm_medium=image_share&utm_source=tumblr

I’m thankful for ballet night.  I have season ballet tickets with a girlfriend at the NAC and we’re going tonight.  I’ve forgotten about it multiple times this week with the chaos of life.  But it’ll be a fun girly night out.  My girlfriend and I are going to see Rodin/Claudel put on by Les Grands Ballets Canadiens de Montréal.  The picture doesn’t give me a lot of hope for pretty tutus, but I think I should be able to get into a “story of passion, obsession and betrayal.”

I’m thankful for sisterly love and how well my two daughters are getting along.  They hug goodnight; they read together; they hang out together on the couch when we watch movies.  Earlier this week, we all read Alice in Wonderland together.  One evening they randomly chased each other around the house hugging each other.  This morning I did my eldest’s nails and my 20-month-old then held her hands out for her turn.  It was kids polish so I gave her a quick swipe too.  It’s fun to watch them play together.

I’m thankful for how thoughtful my eldest is.  On Monday when I woke up with food poisoning and still had to drive them to daycare, she helped with the youngest.  She put her snowsuit on herself with no argument and she came over to me, with a look of genuine concern to ask if I was okay.  When I explained I was sick and my tummy hurt she hugged me; patted my back and then offered to rub my tummy so I’d feel better.   That she so clearly wanted to help was wonderful.

So that was my week.  Hope yours was better.  But if it wasn’t, remember it could always be worse.  You could be Gwyneth Paltrow.