Checking out the new library; in a new skirt!

Dresses for all occasions!

A while ago my Aunt June came to visit.

She is one of my 4-year-old’s favourite people. She lives about 12 hours from us in northern Quebec, but visits 3-4 times a year. She volunteers at her church rummage sale, which accepts donations for re-sale for charity – and so she “collects” many things to bring down each time she visits.

This last time, she came with second-hand clothes and a collection of previously loved children’s books.

One of them was And to Think That I Saw it on Mulberry Street, by Dr. Seuss.

I’d never heard of it before and, while I was excited to see Dr. Seuss in the mix of “new” books for my girls, I didn’t give it a whole lot of thought until I picked it up a few days later and discovered that the book was bound upside-down and backwards.

It’s Dr. Seuss, and he’s a wacky kind of fellow, I thought. Maybe this is on purpose?

I did a quick Google search to check. No mention of any sort of fun upside downwardness on Mulberry Street.

So it’s a printing error.

This realization came with two thoughts: 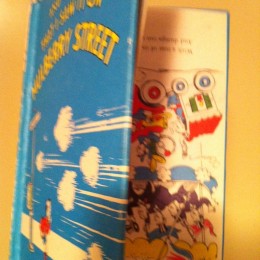 Visions of giving up my day job to spend time with my kids and follow my passions, all because of a Dr. Seuss printing error, bounced around in my head.

I’d already selected the tile for the fictional en suite third guest room bathroom in our equally fictional summer villa before I buckled down to look into things a little more … fully.

But it was a fascinating click-fest through online Dr. Seuss-ness and book collecting.

Here’s what I learned.

1.  This is the book that launched Dr. Seuss as a children’s author

Trusty Wikipedia informs me that Theodor Geisel wrote and illustrated it under the pen name Dr. Seuss and first published the book in 1937 with Vanguard Press. He was 33 at the time and had 10 years experience as a cartoonist.

The book tells the story of Marco, who, while out for a walk sees a horse and wagon. But that’s not a good story to tell his father, so instead he dreams up an elaborate fantasy involving a parade of imaginary people and vehicles travelling along Mulberry Street.

The street name is likely a reference to the street of the same name in Geisel’s hometown of Springfield, Massachusetts. The book was conceived by Geisel in 1936 while he was aboard a ship returning home from vacation with his wife. Apparently the rhythm of the ship’s engines inspired the book’s rhythm.

At least 20 publishers rejected the book, citing a variety of criticisms including that fantasy “was not salable”, that children’s books written in verse were out of style, and that the book lacked a clear moral message. His wife Helen suggested that the book’s cartoon-like drawings and story, which might be seen to encourage daydreaming and lying to one’s parents, might be a reason for rejection.

Geisel finally ran into an old college classmate one day, who had just landed a job at Vanguard Press and agreed to publish it. That went well for all involved.

So I have a misbound copy of the book that launched Dr. Seuss.

That sounded kind of promising until I read:

2.  Book collectors generally view misbound books as a “bad thing” rather than a “novelty”

Unlike those zany free-spirited stamp and coin collectors, who pay extra for errors, book collectors prefer to find books as close to perfect as possible. So errors “are considered defects and will almost always have a negative impact on the book’s desirability.”

Other sources and chatter online seemed to consistently back this up.

That said, there are exceptions to this rule, so this didn’t totally squash my dream.

I then further examined my copy and noticed it was a “Book Club Edition”.

What’s that, you ask?

A quick Google search tells me that

3.  Book Club Editions of books are generally not valuable

Sigh. Briefly, a book club edition (BCE) refers to a book printed by a “book club” with cheaper materials than the original publishing house, so while there are always exceptions, it is generally not worth much to a collector. Apparently, sometimes these are smaller than non-BCE editions and pages might be chopped off rather than shrunk which might touch/impact the illustrations. I’m pretty sure this is what I have.

As for the specific book club? My edition is part of the I Can Read it All By Myself Beginner Books distributed by Grolier. There seem to be mixed reviews about Grolier, but the Beginner Books series itself is pretty awesome.

Briefly, Beginner Books was co-founded by Phyllis Cerf with Ted Geisel (ie: Dr. Seuss) and his wife Helen Geisel. Ceft compiled a list of 379 words as the basic vocabulary for young readers, along with twenty slightly harder “emergency words”. No more than 200 words were taken from the list to write The Cat in the Hat, which is the first book in the series. Subsequent books in the series were modeled on the same requirement. The Beginner Books “dominated the children’s picture book market of the 1960’s“, and continue to shape the early literacy landscape.

Discussion of the value of my book aside, I am now wondering if heading to the library and working our way through those we’ve yet to read in the series might be a fun summer “project” with my 4-year-old.

But we should get back to the viability of my Dr. Seuss retirement plan.

Tack on to the above that my print is nowhere near first edition and has no dust cover (apparently a first edition with a dust cover of Mulberry Street could fetch me $8000), it doesn’t appear I’ll be quitting my day job anytime soon.

That said, I might just bring it in to a used and rare book store in the near future and double-check.

Until then?  It’s a cool quirk and a fun read!

What about you? Do you think there is any novelty value to my book? Do you own any wacky misprinted books? I’d love to hear about them!

13 thoughts on “Will I Retire on Mulberry Street?”