Today’s Daily Prompt called out to me for a couple of reasons.

Take a look at your bookcase. If you had enough free time, which book would be the first one you’d like to reread? Why?

Well, I’ve been on a reading kick recently for the first time in ages.

Really, for the first time since I became a mother of two.

I use to read a lot. But then parenthood in all its chaos arrived. And I started blogging. So there went another chunk of spare time.

They were new books.

Because until now, post pregnancy #2, anything I’ve read has been a reread.

I reread favourites a lot.

So, when I have spare time, and don’t want to be bothered trying to figure out if I will enjoy a new book, I return to the comfort of stories I know I will enjoy.

Specifically? I have reread these two a lot: 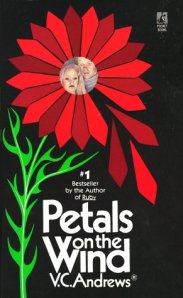 I discovered V.C. Andrews when I was fourteen. There was love, and sex, and revenge, and over-coming adversity, and coming of age and drama, drama, drama! What more could a teenager ask for, really?

The first series I read was Dawn, but I fell in love with the Flowers in the Attic series, and specifically this book – which is the second in the series. They finally escape from the attic and it’s a straight up tale of revenge where Catherine gets back at her evil mother through, well, years of crazy obsession.

Oh, and there’s ballet. And everyone thinks she’s gorgeous. Looking back, I think she probably sort of had the same appeal to me that Bella Swan has to similarly introverted girls today. Except, well, Catherine was also smart, coordinated and talented. Indeed, I credit her and my teen obsession with this book with the fact that I’m a season ticket holder for the NAC Ballet Series.

I realize with that Bella/Twilight dig, that I am now old. I think I enjoy rereading this book because I remember me when I was younger.

I also enjoy that I can now sort of laugh at it. While researching a previous post where I referenced my V.C. Andrews obsession, I also linked to this absolutely brilliant drinking game based on the book. The chapter synopsis in this blog post – while I don’t agree with all of it – is also pretty straight up awesome.

And then in January? I discovered they had done a remake of the 1987 Flowers in the Attic movie, with discussion of possibly doing a Petals in the Wind movie.

And in May? They did!

I must admit that I haven’t seen either yet, but I plan to hunt them down for a guilty pleasures viewing fest at some stage. 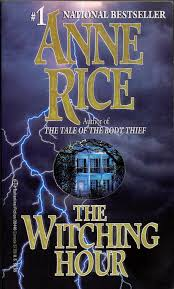 This is my print of the book. But mine looks far more tattered. Some of the front is taped and stapled together, and the inside picture flap with the house has been missing for years….

Next? I reread The Witching Hour.

I first came across Anne Rice at seventeen when Interview with the Vampire hit theatres.

I’d already read Bram Stoker’s Dracula by this stage and quickly devoured all of Anne Rice’s vampire books starring the still tortured, but non-sparkly and non-teenage version of the undead.

Having finished her vampire books, I next discovered her trilogy about witches and while I read all three, it was this first one that I have read and reread and reread over the years – most recently picking it up again this past March (thank you blog for chronicling my life).

I must have read this well over 10 times by now. It’s the family chronology portion of this book that I adore: the history of the witches. The female chronology. It is beautifully written and the historical fiction is pure delight to read. 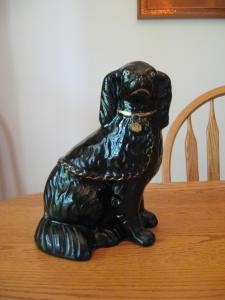 To an extent, I also find ties between that chronology and a china dog that’s passed from mother to first daughter in our family for almost 200 years. We don’t have a ghost that goes along with it, but I always feel a moment of shared historical female-centric empowerment when I get to the history of the Mayfair Witches in the book. [I wrote about the dog here if anyone is curious.]

But getting back to the witches, last time I reread the book, I had this random thought that it would be fun if someone did a quiz to help you determine which Mayfair Witch you are. Well, you guessed it: someone has.  Apparently I’m Julien. Not sure what it says about me that I end up as the only male witch in the bunch. But I’ll take Julien.

I also love the idea of the Talamasca: of there being an organization of occult historians. If ever there was a dream job for me, I’m thinking that might be it.

What about you? Do you have a book you love to read again and again?

27 thoughts on “Guilty Pleasures: Off the Shelf”