…is I didn’t appreciate it when I had it.

There were times I snickered about it.

The bureaucracy of it was … so very … well, everything about office life in the Public Service that people joke about.

It was formal and coordinated by the Director’s Assistant (who didn’t drink coffee).

It was very structured.

There was a posted – and circulated by email – coffee purchase schedule. 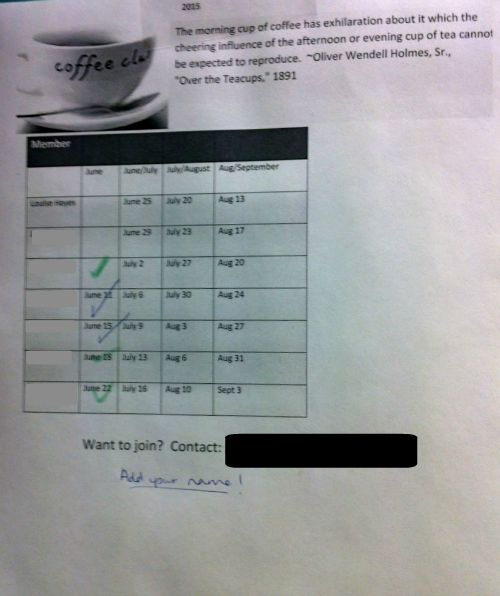 I had “pretend I’m ATIP and blank out names” fun again here! This was the last schedule posted in our kitchen before I left the job…

Coffee was generally brewed every morning by 8:15am and usually again mid-afternoon.

Polite email notices were sent out prior to afternoon brews to advise of forthcoming coffee-topia.

Every month you had to contribute $5.00 to the milk, cream and sugar fund.

Regardless of whether of not you put any of that in your coffee (which I don’t).

We were also certain to extend the coffee club invitation to all the poor coffee lovers two floors down who were not allowed to brew coffee on their floor due to a co-worker with a coffee odor aversion.

When our coffee commuters registered concerns about having to come up two floors in the morning only to find the coffee not yet brewed, we tried to action accordingly.

Because we were about inclusion of all coffee lovers.

So long as you don’t drink Maxwell House.

Because, as it was clearly pointed out to me prior to my membership being accepted, we weren’t THAT kind of coffee club.

As I understand it, historically, it was strictly a Bridgehead Coffee club.

Until it was pointed out that some people in the club lived nowhere near a Bridgehead, posing challenges and inconvenience for purchase.

Concessions were then made to welcome Starbucks Coffee.

Following a visit to a Fair Trade Christmas Craft Fair, I also once brought a Ten Thousand Villages blend to good reviews.

But, as a colleague learnt from experience, flavoured coffee was strictly verboten.

He accidentally once bought maple flavoured coffee and subsequently circulated and personally apologized to all members of the club for the error of his mistake.

Apparently our Canadian pride – at least in coffee club – does not extend to maple flavouring. Thank. You. Very. Much.

Being late for your scheduled purchase was also not tolerated.

Email reminders that your purchase date was coming would start to arrive a few days prior, had you not been considerate enough to purchase and deliver in advance.

If you didn’t deliver on your due date, you were clearly informed of your delinquency by the coordinator.

It came to be that if I had forgotten to purchase coffee the night prior to my due date I would choose being late for work over arriving WITHOUT coffee.

Because if you did, a subsequent email would generally be sent out to the group, forlornly asking if ANYONE would mind bringing coffee in ahead of schedule so that the WHOLE CLUB won’t go without because of the actions – or lack thereof – of one member who we won’t name (but you can check the schedule).

Office coffee club was coordinated with an administrative oversight function only capable in an organization that professionally does bureaucracy.

I remember when I left my job thinking I would enjoy the FREEDOM from coffee club.

Until I remembered how much money you can blow on coffee.

No one makes coffee at my new office.

So after a week I went out and bought some filters and a bag of coffee.

I dusted off and thoroughly cleaned one of the three neglected coffee machines in the kitchen and brewed a pot.

It came out a bit burnt.

Two days in a row.

I’m not sure if it’s from lack of pot use, or how much coffee I used, or what.

I mean, I’ve made coffee before. So I’m not sure what the issue is.

I’m gonna give it two more days before I try a second machine.

I’d invite others to join me, but I’m not yet confident in the quality of my coffee.

One of my new coworkers came in as I was cleaning the pot and commented that they use to make coffee, like, four years ago, but then stopped.

He shrugged. “You need someone to coordinate it.”

Not enough coffee love above for you? Check out my Coffee Pinterest Board. It’s just a small obsession…

21 thoughts on “The Thing About Office Coffee Club…”