I didn’t think it would be this hard.

And not being THAT PARENT.

But then there was that one shining moment last month where I was so very clearly THAT PARENT.

That parent, who, Mr. Lifeguard, really wasn’t gonna take your completely haphazard “laying down of the law”.

Because it was inconsistent.

And upset my kid.

For what it’s worth?

For the past six years of parenting I’ve been really good.

We’ve spent a lot of time hanging around pools and I’ve taught my kids to listen to, and respect, the guards.

And to WALK! on deck.

And for all the great guarding I’ve observed, I’ve also observed various moments of “don’t really care”, “absolutely not paying attention” and “I’m not paid enough to do anything about _____” guarding, and held back on saying anything because, well, I didn’t want to cause a fuss, and become THAT PARENT.

So there we were. At the resort pool. Where, for the record, I think it sucks that you only earn 22 cents over minimum wage as you divulged to my dad, bonding, after a week of seeing us twice a day, every day.

Why do I think this sucks?

Because I to, use to guard.

Here I am, guarding the waterfront at a little beach volleyball tournament they do in Ottawa each summer:

That’s me on the chair; guarding the beach at H.O.P.E. Volleyball tournament at Mooney’s Bay

I also worked at a couple different pools, two other beaches and even guarded a wading pool for one summer when I was 16.

You put up with a lot.

While you are trained in first aid and water rescue, you are effectively customer service.

Stuck in a guard chair.

In a bathing suit.

My experiences there could fill a couple posts.

I know yours could too.

But that doesn’t stop me being royally pissed off when you tried to stop my five-year-old from going down the water slide at the resort pool.

When you let her happily do it the day before.

It would have been okay if you’d stopped her then.

Heck – I was a little reticent.

She’d been nervous. I’d gone up with her while grandpa had waited to catch her at the bottom.

But after the first go? She was hooked.

And while we waited at the bottom for her, she could land and swim to the side by herself, no problem.

Which both guards on duty had watched.

So, the following day, she’d been waiting all day to get back on the water slide.

You get the idea.

But apparently there’d been some sort of incident between yesterday and today.

And so you were swim testing the kids before they could go on the slide.

At first you wouldn’t even test my kid, because she was only five.

You simply turned her away, which really confused and upset her given it hadn’t been an issue the day before.

When I asked what the issue was, you gave her a passing glance, bobbing in deep water, and said:

I explained she could swim.

And you gave me THE LOOK.

That look from lifeguards who obviously think the parent is delusional.

“No really,” I said. “She can swim a half-length of the pool. She went down the slide and swam to the wall repeatedly yesterday. In front of the other guards.”

You dismissed me. And went to go deal with some older kids trying to prove they could go on the slide.

By this stage my five-year-old was about to have a fit, having realized you weren’t going to let her go on this slide she’d been waiting for all day.

And I realized I was going to have to deal with the aftermath of your inconsistent new edict based on some incident that had nothing to do with my kid.

She passed the height requirement and any other posted written rule.

So I pulled her aside and told her she had to prove she could swim.

She immediately put her goggles on and started swimming between walls in the deep end. The same test you’d been doing with the older kids.

“HEY!” I called a bit louder when you paid me no heed. You looked over, annoyed.

“There! She’s swimming. That’s your swim test, right? Can she go now?”

For the life of me, I felt like I was arguing with a bouncer trying to get into a bar, swearing my black pants passed whatever the random measure for dress code was.

And I was THAT PARENT. Glaring all my annoyed “you are being RIDICULOUSLY UNFAIR” momma bear power at you.

You let my kid on the slide. 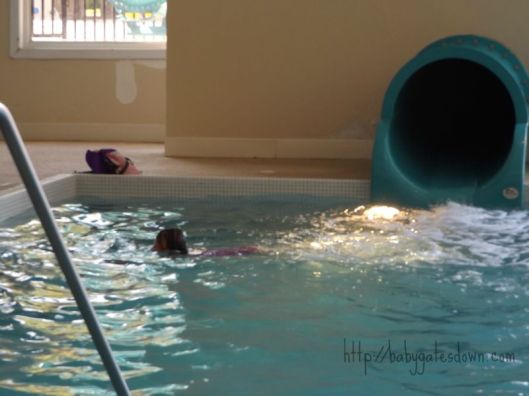 See?! Swimming! And me? Yeah – THAT PARENT. Who instead of just graciously taking the win, took a photo. And then blogged about it.

And our vacation was the better for daily 4:00pm visits to the slide.

What about you? What are the moments that make you morph into THAT PARENT? Let me know.