It’s cold here. At the end of January in Canada, summer isn’t even in sight.

A few years ago, I did a whole music post honouring the ukulele around this time because it is just about the most summery instrument I can think of.

This week, Helen’s mind was clearly in a similar place as she has challenged us to honour the sun.

That brought back memories of one of my favourite tapes from childhood. It was a mixed tape called Sun Jammin’:

You can click on the image source to see the 18 summer fun hits.

At the time, I bought if for Amazulu’s 1986 hit Montego Bay. There was this girl in my class in Grade 6 who did a dance to it and I liked it so much I never forgot it. So when this album came out a few years later in 1991, well, I was sold.

But I loved the whole album.

Among other things, it was my first introduction to Bob Marley.

My choice today is Stir it Up. Written in 1967, it was released in 1972 on Johnny Nash’s I Can See Clearly Now album. It was Marley’s first hit outside of Jamaica.

You can find the full lyrics at A-Z Lyrics. But a sample gives you the drift:

It’s been a long, long time, yeah!
Since I got you on my mind.
And now you are here
I say, it’s so clear
To see what we could do, baby
Just me and you.

Come on and stir it up; little darlin’, stir it up.

It’s just such a relaxed, lay-back and let it flow, summer song.

But why, of all the summer fun songs on that album, did I pick that one?

Well, years later my husband and I happened to go on honeymoon to Jamaica.

They sure are proud of Bob Marley’s success there and his songs were basically the soundtrack for our holiday there.

So now when I hear Bob Marley, I think of my husband, all the hope, happiness and stuff tied up in new marriage, and a relaxed week in the sun. 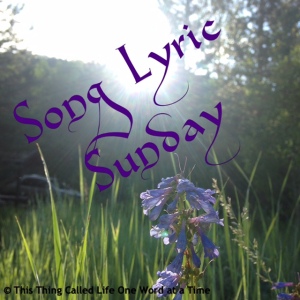 In the cold of winter, I could do a lot worse for daydreaming.

Check out what others have shared on the hop by clicking over to Helen’s blog or share your own in the comments.

Warm wishes until next time!