It’s been a big – and long – week over here.  First week at a new job for me; second last week of parental leave for my husband; and my eldest started school.

Let’s all pause for an appropriate moment of parental wonder on that last point.

On Saturdays there is usually this lovely blog hop over at Melissa’s Mommyhood Chronicles that I join when I have a chance.

She’s on holidays this week so, while Candice from New Modern Momma is graciously guest posting on theme, there is no hop – as such.

But I’ve gotten use to listing out some of my humorous weekly highlights.  So, being a creature of habit (who had the post already well underway) I’m doin’ it anyway.

So, with that said, I give you:

My Top Five Laughs of the Week

Little Red Riding Hood meets the Big Bad Wolf when she doesn’t listen to her mother and tries to LEAVE THE DRIVEWAY.

Unfortunately, it didn’t really have the scary dissuasive effect I was going for.  Sadly, I never was very good at art. 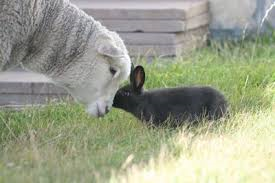 Two animals. One toddler. But there can only be ONE favourite stuffy. How will it end? Photo credit: http://www.falklandislands.com/section.php/78/1/island_hopping

7 thoughts on “Bunny vs Lamb: Battle for Dominance!”