It’s been a few weeks since I joined up for Lizzi’s Ten Things of Thankful Weekend Hop, but I thought I’d do it again today because I’m at the end of two busy weeks; and the end of Saturday (which I generally just find to be an exhausting day) and I figured it would be uplifting to reflect on the good.  I then fully intend to be in bed by 10:00 ’cause I’m wiped. So, by way of quick intro – Lizzi over at Considerings does a Hop each weekend to encourage an “Attitude of Gratitude”.  This by definition puts her in the category of “people who are kinder and nicer than me” because I don’t think I could actually find 10 different things to be thankful for EVERY SINGLE WEEK.  But she does.  I’m forever slightly awed by that magic power. 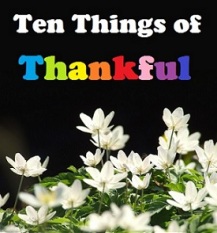 We finally made it out to the pumpkin patch last weekend to choose our Halloween Pumpkins.  Yup.  Talk about getting in under the wire.  Being the forever multi-tasker (that’s code for “Mom who wanted to avoid a shopping trip”) I also managed to pick up a new winter hat for my youngest there.  So thankful for good friends to hit the patch with; the kind folks at Miller’s Farm (which, having just checked their website, apparently does snowplowing now that pumpkin season is over…); and a fun day had by all.

Finding the perfect pumpkin (while, coincidentally sporting the hat we bought there last year)

Thankful for a fun Monday night pumpkin carving with friends.

It’s a whole tactile devopmental thing. Seriously, there’s books and stuff about it… 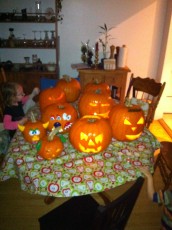 In the light of day…

Thankful for a week of Halloween Fun.  A work party for the kiddies at my husband’s work; and my brother and sister-in-law who came around to help hand out candy and take our kids trick or treating.  I’m also thankful for this fun blog hop I do every Tuesday called Twisted Mixed Tape, which seems to make me see music in everything.  So I captioned the gallery below in homage to the wonderful Jen Kehl over at My Skewed View and her fun weekly blog hop.  Do let me know if you recognize my musical references 🙂

Even after all this candy, I walk the line.

Sorry I’m not home right now, I’m walking in the Spiderwebs; so leave a message and I’ll call you back! 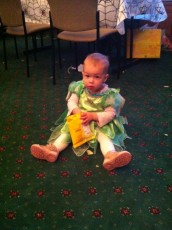 I love the randomness of life.  I was coming out of the gym this morning with my two girls and there, in the courtyard, was a wild turkey.  I didn’t get a photo – but here’s one from a few years back when a group of them last wandered our ‘hood. 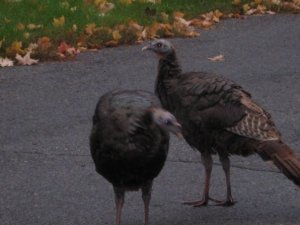 I am equally thankful for the fun randomness of the Internet.  In the past week on Twitter I’ve been followed an engineer, a comedian, the owner of a knitwear store (my mom knits for craft-fairs – So GO KNITTING!), and a random high school guy from the US (?!?).  They all seemed interesting, so I followed back.  Bring on the virtual marketplace of ideas!  Or random fun cacophony – whichever.  As long as it’s entertaining.

On the lower-brow end of the Internet (I realize that means I just tried to argue Twitter was on the other end, but can we just let that one go?) I also found this GEM when looking for the clip of Buffy talking about how beer is “foamy” in the “Beer Bad” episode from Season Four of Buffy the Vampire Slayer.  It’s been a long week.  And I’m enjoying a beer.  A foamy beer, in actuality.  I am also now enjoying this clip.  So I’m sharing:

I’m thankful for the extra hour of sleep tonight.  Yay daylight savings!  As for kids not really understanding there’s an extra hour to sleep?  I’m thankful that Sunday is my husband’s turn to get up with the kids.  Just saying…

My husband went hunting yesterday with his brothers and came home with goose meat to make jerky and some deer steak (not fresh – his brother’s stock)  – so we had deer steak for dinner tonight.  So I’m thankful for that because it was delicious.  My husband has wanted to start hunting more because his two brothers do – so I’m glad he got the chance to go.  He also now has a deer tag, so he’s looking forward to going again.  And me?  I like deer steak, so I’m all for it.

I was asked this week to speak on a panel about my volunteer experiences with my university alumni association.  It was a fun experience and I’m thankful for the positive experiences I’ve had volunteering generally and with Carleton (my alma mater) specifically.  Volunteering – when you find the right organization – is an incredibly rewarding experience.

I’m thankful for the imagination and resilience of young children and for the support I have from others as a parent.

My four-year-old is getting bullied on her bus to school.  Two older kids will sit behind her and grab her feet under the bench and yank so she falls forward and hits her knees on the floor.  They also tripped her once when she was getting off the bus.

The five and seven-year-old who get off at the same stop as her told their father what happened, which is how I found out (they were too scared to help – apparently these kids pick on others too, but have zoned in on my kid).  Anyway, my daycare provider (I’m not there at bus pick up) spoke to the bus driver; who said she and the bus monitors (older students) would keep an eye out for it, but that my child sometimes “sits too far back” so she and monitors can’t catch everything (unclear why you can’t just tell a 4-year-old she has to sit at the front and the bullies aren’t allowed to sit behind her, but we’ll get to that in a moment).

That preliminary intervention apparently didn’t work because it happened again on Friday.  So my daycare provider will speak to the bus driver again on Monday (bless her!) and I will contact the school to see if they can’t just arrange that those two kids aren’t allowed to sit behind mine (which would seem a reasonably easy fix).  I’d of course also like them to talk to the older kids about how it isn’t cool to beat up a four-year-old.  But I’m not expecting miracles.

So it’s not a great situation – but here’s what I’m thankful for: a) the two little kids who told their dad; because otherwise, I wouldn’t have known, because my daughter wouldn’t have known how to express it (I knew something was wrong the first time it happened, but wouldn’t have been able to figure it out from what she told me between tears) b) my daycare provider who, as a more experienced parent, stepped right in and talked to the bus driver about how to stop it and talked to me when she suspected that might not be enough.

As for my daughter?  We had a good talk about how she and her friend on the bus should stick together; stay away from the older kids who are picking on her where possible; not sit right in front of them; and as soon as they do anything; tell a monitor or the driver.  My daughter then informed me that her and her friend have decided to “do magic” on them whenever they are mean to “take care of them.”  I am hopeful our interventions make her believe her magic worked and we resolve it soon – but I was thankful that she was able to tell me in enough detail this time that it had happened again so that I can hopefully do something to help.  I’m hopeful those in the concrete positions to help, actually do.  And I’m hopeful that I will be able to soon post back thankful on this one.