But this week?  She goes plain old criminal.

As a friend?  I’d just like to be the first to extend the olive branch and say, if you need to … like … talk … we’re all here for you.  Because there are healthy choices, and unhealthy choices, and, well… it’s really just a small short spiral down to …

This week, Jen Kehl, our maestro and our musical blog hoppy tour guide for Twisted Mixed Tape Tuesday is looking for: song that coulda sent me to jail.  Check out my co-conspirators here: 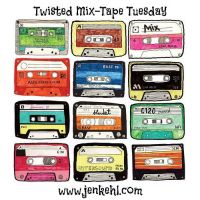 Hmm.  I’m about as honest and law abiding as they come.  So I was momentarily stumped.

But then it hit me.  I was, like, TOTALLY, a teenager once.  So here’s five songs from my formative years that tested my moral fortitude while being, like, really catchy.

Yeah!  If I ever had the mind to be?  I could have done some damage with zero repercussions, right? There’s the message I got as a teenager.   I remember thinking that it was wrong, but, meh! Life.

Then I listened to the song about ten years later and actually LISTENED to the lyrics.  Smart commentary.

Hey! man you talkin’ back to me?
Take him out!

Everyone loses.  Including you.  Seriously, in the world of easier said than done?  Sort your shit out and just be happy.

Ah!  But in the Offspring did not begin my never actually started considerations of truancy!

For my next choice, I give you Roxette’s Joyride from 1991!  This came out before I hit my teens, but late enough for me to understand that joyriding was something in the “bad” column of behaviours.  As for things in this video that could send you to jail?  Abuse of the blue screen and horrible spandex pants spring to mind.  And I suspect playing guitar on the hood of your car while speeding down the highway might not fly with the local authorities either.  Even if you explain the whole “we totally faked it with a blue screen” thing.  That said, I have a soft spot for Roxette given when they arrived in my musical awakening.  And I think their absence to date on this hop is a total crime.  Rather like cowbell, the world needs more Roxette!  So here they are:

But we should get firmly back into my teens.  You know?  Where developing morals meet bad influence and hang out for a while?  As the mother of two preschool girls I’m not panicking (quite) yet.  Really.

Next up I give you Cypress Hill‘s Hits From the Bong from their 1993 album Black Sunday.  I know many of you on this hop are Tarantino fans and I almost cringe to inform you that whenever “Son of a Preacher Man” starts and ISN’T “Hits From the Bong”, a small part of 15-year-old me dies.  It’s pure “time and place” music.  I remember a specific summer holiday and the group I hung out with who played this album ad infinitum.  Even owning the album made me feel bad-ass.  The song is still on my IPod.  And, coincidentally, is right up there with Paul Simon’s “Slip Sliding Away” for songs I hope don’t come up during my treadmill workouts.

As far as edgy suggestively criminal songs from my era goes, I don’t think my list would be complete without the Beastie Boys.  So here’s Sabotage from 1994’s Ill Communication.  Which I guess is more about cops being cool than the other way around, but they are pretty 1970s retro cool in the video.  This was a favorite from the team I lifeguarded with at Westboro Beach on the Ottawa River when I was seventeen.  We had these jackets that read “Rescue/Sauvetage” – Sauvetage being rescue in French.  So a number of the guys thought that worked with the Beastie Boys song, and much running around packing rescue torpedos like “heat” ensued.  After hours, of course.  I look at that with my last pick and am suddenly curious about the blending of the 15-year-old crowd and the 17-year-old crowd based on musical choice.  I think that would have been an … interesting party.

So that brings us to closing time.  My final choice is a song that hit big in my first year of university.  The song was cool.  The video was fun.  And, hey, if I was going to date someone of questionable moral character?  I think it might have been someone like one of these guys.  Because, really?  What girl of still maturing impulse control wouldn’t want a dude who can a) sing and play guitar in a totally cool club and b) probably also pay for her drinks given his, um, entrepreneurial side gig.  Here’s Fun Lovin’ Criminals with Scooby Snacks.  Also – another round of warm fuzzies to all the Tarantino fans out there what with the shout out at the beginning of the song 🙂

So that’s all I’ve got for you this week!  Until next time!