Greetings from the land of -18(ish) celsius with a chaser of 25+ centimetres of snow. 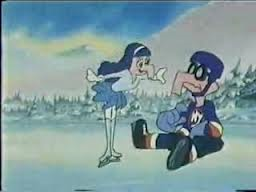 In glass-half full land – that means it got WARM enough outside to snow.

In glass-half empty land – I’m not a lover of winter and we’re currently trying to locate our roof rake.  So weather like this leaves me counting the days to spring.

But the weekend – and this post – is for reflections on why thankful, not to gather ‘ye round for a pity party – even one with snow cones.

All that to say, I’m linking up today with Lizzi for her Ten Things of Thankful Weekend Blog Hop where we all strive to accentuate the positive.  Please check it out: 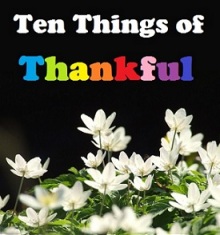 I was thankful to my mother – for coming over to stay home with our eldest on Monday – the last day of the “sick with strep throat” stretch – so that both my husband and I could return to our respective offices and re-learn how to do our jobs.

I was thankful for two absolutely awesome free hockey tickets this week (and my mother for babysitting) so my husband and I could get an evening out  to see the Ottawa Senators defeat Buffalo.

As for absolutely awesome – I mean four rows back from the ice and free parking included.  It was a nice “see how the other side lives” moment.

I was thankful for a fun Christmas party out with friends.  It was an evening first of really good, smart conversation, with great people; followed up by the type of conversation and drama that – post 20-years-old – can truly only be brought on by way too much alcohol.

After a week home in the parental stress and hell of strep throat land which almost resulted in a trip to the hospital, problems of the “OMG!  You can’t talk to that guy because 8 years ago he broke up with someone you vaguely know!” variety, was just the type of escapist evening I needed.

I was thankful for the time yesterday to get most of the remainder of my Christmas shopping done.  All that’s left are teacher/daycare gifts (open to suggestions), my brother and sister-in-law (partially), my mother-in-law and my husband (partially).  Wait!  Suddenly I’m a little stressed again by how much is still to go.   So I’m thankful to be more than half done – how’s that?

I’m thankful for new and old friends.  On Friday, I went to a new friend’s birthday and brought one of my oldest friends along.  First, she came over for take-out dinner with the family.  Then, at the party, I caught up with her, while meeting and talking with new people I never would have met otherwise.  Another fun and relaxing evening.  In case any of you are counting and realize that makes 3 evenings out this week, it was a bit of an exceptional week and I swear I like my kids.

I’m thankful that my 4-year-old is really too young for an American Girl Doll.  I’d read about these, but figured we were safe up here from this American “thing” in our Canadian fortresses of snow and ice.  But their catalog showed up in the mail two weeks ago and my eldest poured over it like it was the kindergarten equivalent to Cosmo.  She asked for one – I nodded sagely – and promptly hid the catalog when she wasn’t looking.  She has since thankfully forgotten all about it.  Because at $110ish a pop, that’s a bit much for a doll I know will either a) end up in the bottom of the toy box or b) end up in the bathtub.

Image from jezebel.com (which really makes me want to go find THAT article).

I thought I was the only one who might think these were a bit ridiculous until I came across Mommy, for Real‘s post about this American sensation.  Basically sums up my thoughts.  Ie: I’m not buying clothing for dolls that’s pricier than what I’d buy for, well, ME.

I was thankful for the downtime this morning that allowed me to clean my house.  I’m trying not to cringe and be too Mommy Martyr in re-reading that statement because, after a week hermitting in the house with a sick kids, it looked like a bomb had gone off; you couldn’t really walk anywhere without dragging crumbs with you to different locations; and the general rules of cleanliness had kind of been put aside for a bit, resulting in practices like allowing a four-year-old to snack on Raisin Bran on the couch (Note: I wouldn’t recommend this).  So I was thankful for a) the two hours of cleaning time and b) the resulting calmer state of my soul now that I don’t grind Goldfish, Raisin Bran or Lord knows what else into the ground with every step I take around my home.

I’m thankful that I finally got aging car #1 into the garage for much-needed and overdue maintenance.  For those who may recall my passing reference to this need a few weeks ago, you will be happy to know it cost nowhere near the $2000 originally quoted by (God bless them) Canadian Tire.  I intend to live firmly with head in sand until the credit card bill arrives, but I know it was long overdue and will, hopefully, result in the car lasting at least another two years.  Next up?  Long overdue maintenance on aging car #2 with same life cycle goal in mind.  #prettyplease #allIwantforChristmasistwofunctioningcars

I’m thankful for the two(ish) hours I have alone RIGHT NOW while my husband takes our two daughters to meet Santa at the mall.  I’m hoping there will be no Santa drama.  Last year my eldest was still scared of him.  So I’m hoping she’s over that and that my youngest somehow skips the whole Santa stranger danger stage of toddlerhood.  I’ll let you know how it goes…. 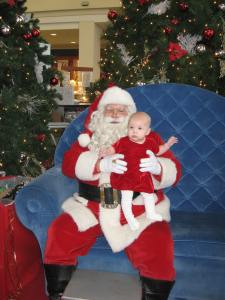 My youngest with Santa last year. My eldest – after asking to see him for weeks – refused to go near him.

So that’s it from me.  Hoping everyone is having a good and relaxing weekend!