So this post successfully rounds out an inane blog goal I had for this week.

My goal was to post every day this week.

For the first time EVER on this blog.

I’ve had a crazy, chaotic sort of last few weeks at work.  And with the rest of life, generally.

Like any sane person, I figured I could use another challenge.

You know?  After, against all odds, he finds the bus; gets on the bus; deals with any number of issues; then heroically crawls under the bus to try to diffuse the bomb and …

Annie: What is that smell?

Jack: We are now.

Anne: What, you thought you needed another challenge or something?

Don’t get me wrong.  I’m not diffusing bombs or anything.  I haven’t completely docked my perspective beside my sanity back on shore before cruising off to self-identified Maryrland.  But the past few weeks have taken on a sort of rollercoaster, ringmaster, regardless of the number of lions tamed here comes the next and, by the way, our princess is actually in another castle, kind of feel to it. 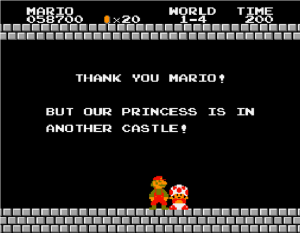 The moment I started identifying with Mario? Yeah.  That wasn’t awesome. Credit: http://knowyourmeme.com/memes/but-our-princess-is-in-another-castle

So with that out of the way, on to my Friday post!

Given my downtime goal of the week to post nightly, I’ve been on a bit of a walk-about of the blogosphere and Interwebs over the past week, if you will.

So, I thought a fun way to end this escapade would be to join up with the Friday Feature link up over at Blogitudes:

I’ve noticed a few blogs I follow joining up for this and it seems a right proper way to end the week, reflecting on all the Internet has done brought us in the past week, and paying forward the wisdom we’ve acquired.

So here goes it:

I enjoyed Martha Kennedy’s Choose Your Fight, 1970 post as it gave me lots of food for thought: on choosing your battles; the perspective of age and distance on life events; women’s issues and what has and hasn’t changed; and my role and impact (or lack thereof) in the continuing narrative that is history and our lives.  I truly enjoy her blog.  Whenever I visit, I am left with something to think about.

I pondered the challenges/desires of making friends as an adult and particularly enjoyed Lori’s Life and Other Stuff’s Post on the challenges of finding adult friends.

Brenda, over at Friendly Fairy Tales gave me pause mid-week with this post about how the ordinary can transcend and how the daily grind can be grist for a deeper calling.  It was a beautiful post.  And gives a girl hope.

And last, but never ever, eva least, the ever entertaining and often thought-provoking Aussa reminded me of one of my “when it’s less than awesome to be female” moments with her post on her first sexual solicitation, at 16.  Me?  As a former lifeguard, I remember the elderly regular who gifted me his dead wife’s bathing suits and then, in total seriousness, asked me to model them for him.

It was a busy week.  On Monday, I linked up for the first time with Meredith’s weekly Manic Monday link-up over at Perfection Pending and wrote about the canary in the coal mine (for me) that is lost socks.  It is my measure that things be going squirrely.

Tuesday, I tried out Cee’s Photography’s Share Your World Link-Up for the first time.  She had me at her road sign question – which just so brilliantly fit with my current frame of mind.

Wednesday and Thursday found me hanging with the friendly folks at the WordPress Daily Post responding to their prompts, firstly on friendship, then on fighting the power!

And, as a note on the friendship front?  Ramona, Willow and I are totally all in for fictional poker with the Disney Villains.  Because that, if nothing else, will be a well deserved fun evening out in all-round fabulously entertaining company.

We  might be looking to run a few tables concurrently now based on numbers, so do let us know if you’d like to join.

What I saw and liked on Social Media

Well!  I almost feel lazy on this bit because there’s this awesome blogger: Candid Mama who does much of this for me.  She does a weekly roundup of articles of interest to parents that I suggest you check out!

But here’s what made me go hmm this week:

@breadwinningmom @Slate Interesting. I'm Canadian, so whenever I read these I wonder how much applies here as well.

I wished I’d bookmarked it properly – so I could give credit where it was due, but I found these awesome shorts via a blogger on Lizzi’s Ten Things of Thankful Blog Hop.

I specifically thought of, and referenced a promise to send, this one, to my neighbour, as we were watching the kids muck about at the park – because it was finally  warm outside – but I hadn’t really thought through the fact that that would mean there would be puddles galore!

As for summing up this week?  Since starting this post, I’ve been humming this:

For any inquiring minds, it was on Janet Jackson’s Rhythm Nation Album and was released as a single in January 1990.

So here endeth my round-up.

And what I take away?  What I learned from my escapade?

I found some good stuff.  Enjoyed some good blogs. Chatted with new and old blog friends.

The key, as it always is, is finding your spot in the clutter; your space in the mess of everything out there.  And finding the points of interest to you in the swirl.

So here’s my try for this week.

And for what it’s worth: For bucket list and days posting purposes?

Five out of five baby!