It’s a big accomplishment for her.  She’s learnt a lot; made friends; grew-up a bit.

But, it’s also a big accomplishment for us.

WE survived our first year of school as parents.

Given that, I thought I’d dedicate a post to what we all learnt from kindergarten this year.

For a family that doesn’t go to church regularly, we ROCKED religion.  My daughter developed a healthy curiousity for her faith; now leads us in grace before meals (which is a great addition to meal-time/family time generally); and has been genuinely interested when we have gone to mass.  I’ve written about this aspect of our year previously on this hop.  If you are interested, just click on the pretty picture to your left.

So, I have to say?  The stuff I was most worried about, didn’t happen.  I was worried she wouldn’t make friends (she did); I was worried she’d have “an accident” at school (she didn’t); and I was worried she might get bullied (she briefly did – on the bus by older kids – but the school was FABULOUS in dealing with it once reported and by December she was getting in trouble for hanging out with the older kids – her buddies – at the back of the bus).

The stuff to work on?

Can I just say I find this a bit of a tall order for 4-year-olds?  Heck! If I managed to master this, I’d be further along in life too…  I might even make these my personal development goals.  Just sayin’.

My husband is Francophone and I’m Anglophone.  We are sending our children to French school because, like they say “L’anglais s’attrape.”  You “catch” English – but learning French, particularly in a minority language setting where it isn’t used by everyone, takes more effort.

I was stressed about this one – both for my daughter and myself as the Anglophone parent.  I was worried she’d be behind.  And I was worried I wouldn’t get the “nuance” to properly participate in school life.

My husband has spoken to her uniquely in French since birth.  We sent her to full-year half-day French preschool last year in preparation for school.

But we were concerned because while she clearly understood French, she didn’t really start speaking it…

…until about November of last year.

The teachers rang early alarm bells about her language skills; suggesting we send her for an ear test (they’re fine – but we went anyway); and have been offering extra help in class all year (which is amazing).

She still isn’t where they think she should be – but we’re over the moon with her progress.  Full sentences, description, you name it.  We’ll keep speaking French over the summer so she doesn’t lose it.

I also suspect it isn’t just about French.  I think she’d have also struggled in English.  Letter recognition, syllables, writing … she’s not there yet.

They also offered homework suggestions over the summer to help.  And we’ll work on it.

As for me?  I think a year of communicating with teachers in French has helped my French skills too!  And I know they appreciate the effort.

Math sucks.  Can we just move on?

Okay – here’s an area that is neither my husband’s nor my forte.  And, as we discovered, it’s perhaps not our daughter’s either. 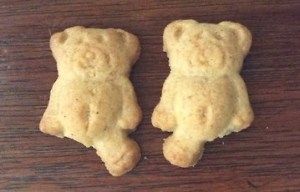 But we invested the time – partners in education – and signed up for Family Math Nights in the Winter to try to help with this lagging skill set.

Not a clue if that specifically helped, but she can now count to 14 and classify objects.

She also enjoys eating Teddy Grahams (after putting them in small numbered groups and making patterns, of course).

Her report card informs me that while she rocks at recycling and can identify most of the seasons; she has not yet discovered new energy sources.  Given she doesn’t quite have the fine motor or language skills to fill out the form to apply for an NSERC grant to fund her alternative fuel research yet, I’m not too flustered about this one.  I suspect I’m missing something in the translation here, but she comes from a long line of engineers on my father’s side; we live at the Science and Tech museum during the holidays; and she’s naturally curious.

While her report card tells me she shouldn’t currently be your “go to” person in an emergency and can’t name the jobs people do in the community, I suspect this has more to do with lack of interest than understanding.  Considering she managed to get invited to a few birthday parties and master school bus politics after a rough start that could have ended much differently without a bit of adult intervention, I’m not too worried.

As a parent, I learnt that no matter how much you slave over providing healthy and varied school lunches, the school is still going to send home copies of the Canada Food Guide and “suggestions” for how you can do better.  I was quite proud that I managed to take that one a bit less personally than my husband (who had been on lunch making duty during the week in question).

I also learnt (again, repeatedly, thanks to multiple notes home) something I’ve known and been working on since my daughter was under two.  Coordination and gross motor are a challenge.

For what it’s worth?  They were for me too.  I was the last kid to learn how to hop on one foot in my class.  But by Grade 6?  I was the best skipper in the class.  She’ll get there when she gets there.  Until then, we keep signing her up for dance and do lots of unstructured sports and swimming.

But as a mom?  In the past two months her colouring has improved SO MUCH that I managed not to freak out at the list of non-acquired skills here.  She’s suddenly made a jump.  Better crayon holding control; more in the lines; longer attention span to finish a picture.  Her daycare provider is committed to colouring parties this summer.   And improvement there will lead to letters, scissor skills etc….

Aside from what’s already listed above, what else did we take away as parents?

Well! After navigating our first year daily lunch and bus-making (we didn’t miss the bus EVER), multiple lists of instructions home, parent-teacher interviews, weekly show and tell homework, and the odd conference call about how our child was (and wasn’t) progressing, we learnt that while she will struggle with some things, the teachers have the very best interests of our child at heart and work hard to help her succeed.

She might not be able to write her name, but she’s happy, social and likes school.

There’s not much more I was looking for success-wise out of her (and our) first year of school.

It’s Monday, so I’m linking up with Meredith over at her weekly Manic Monday Parenting hop.

Do check it out!

I’ve also recently joined Top Mommy Blogs, so if you like my blog – or this post – how about a click below to send a little blog love my way?