It’s been a busy weekend – my birthday weekend (I’ve always thought all the best celebrations happen in July) – but I didn’t want to miss a second week in a row over here at Lizzi and her co-hosts Ten Things of Thankful Weekend Hop, so here’s my quick(ish) and dirty list of ten for this week:

I am BEYOND thankful that I FINALLY finished my macroeconomics course this past Monday when I wrote the final (thankful 1).  I blogged about it here, but let’s just say I’ve been happy dancing ever since and won’t be signing up for another undergrad course again anytime in the near future given the business that is life with two kids under five and a full-time job before we add in any other …. learning experiences.

I was thankful Tuesday to the wonderful RCMP officers on Parliament Hill who let the kids up front to see the parade (thankful 2).  It was busy and crowded, and we had to wait to see the action – but when the parade came, we certainly had a front row seat for the action.  I was also thankful that my girls were in a good mood, and entertained themselves while we waited by rolling down the hill multiple times (to the amusement of many around).

I am thankful for fun birthday gifts from my parents (thankful 3).  In particular?  This one:

I’m thinking not to be used for making iced tea…?

However, I a particularly thankful that my parents managed to find me a new Mommy’s Sippy Cup (thankful 4).

A few months ago my youngest broke my other one.  It was a sad night.  So imagine my joy that I now have a replacement.

I was thankful earlier this week for fun on the Internet (thankful 5).  Both the fun I had searching out new blogs via Top Mommy Blogs and a new hop I’m trying out, and for those who tweeted my Watching the World post earlier this week.  I think it’s my most tweeted post to date – so I was pretty excited.  I’m giving some thought this summer to ways I might challenge myself a bit more with the blog, so it was a well-timed confidence boost.

I was thankful my youngest slept through the night on Thursday (thankful 6).  Let’s just say it was a rough sleep week.

I was thankful to Facebook (and all my Facebook friends) for making me feel EXTREMELY loved on my birthday (thankful 7).  I’m sure Facebook exists for other reasons – but the plethora of birthday wishes is pretty awesome.

I was thankful for a wonderful birthday day out with my two girls (thankful 8).  My husband had to work all weekend, so I’ve been on my own with the girls.  Yesterday, after a morning at the gym, we went to the Governor General’s Residence to check out the summer Frontier College Reading Tents that they have going on every Saturday afternoon during the summer.  I use to volunteer for Frontier College so I was interested to see what it was like.  That said, the whole visit was pretty awesome.  Free close street parking; wandering in a lovely park (we even saw a fox); nice children’s play structure; and then, sure enough, a bunch of volunteers all keen to read to my kids under the shade of a tent.  We’ll be back.

Another attraction on the GG’s grounds…

I was very thankful today to the kind Park Programmers at Sandy Hill wading pool park who flushed my eldest’s eyes out after she thought it would be a good idea to apply sunscreen to her eyes.  In the car.  While I was driving downtown this morning  (thankful 9).  We had been going downtown to check out a music festival when she started freaking out in the backseat.  Thankfully, the festival was near a wading pool, and as a former wading pool lifeguard, I knew they had a fully stocked first aid kit, so they’d be able to flush them out.  Sure enough.  Then we stuck around to do a craft with them after.  Paper bag monsters.

And lastly?  Thankful to those who put together a wonderful musical event for kids today at the University of Ottawa as part of Music and Beyond (thankful 10).  Once the eyes were flushed out, and we’d hiked over, there was plenty of music and games to delight young kids. 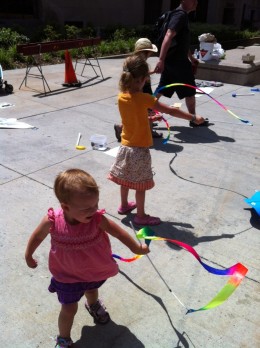 Aside from now having to swing by Dollarama sometime this week to pick up some of those ribbons (seriously, they spent a good half hour just playing with those) there was also lots of good food (we had a hot dog), face painting and a magician in the park to boot.  It was nicely done.

So that’s my thankful for this week.  In under the wire!  Looking forward to seeing what made others thankful this week.