A few weeks ago I got one of those delightful emails from my past.

It was an invite to attend the 20th Anniversary Celebration of Riverside Toastmasters. 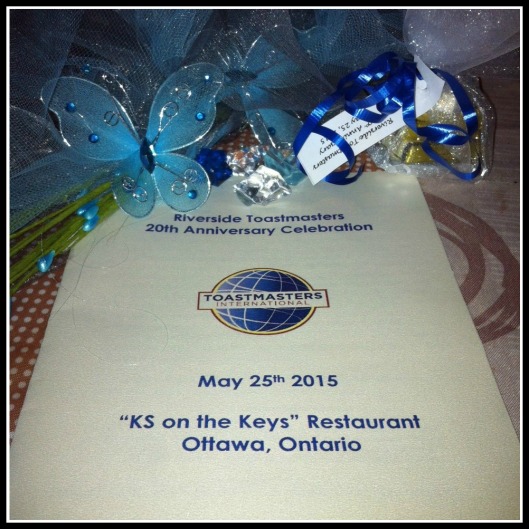 I got to take the centrepiece home from our table because Betty (who won it) declined. My eldest LOVED the butterflies!

I spent a couple of years in Toastmasters and remember them fondly.

I have had … moments of pure public speaking gold in my past. In Grade Six, I momentarily owned the school gymnasium explaining how, if I could be anyone, I’d be the Queen of Hearts, so I could decapitate anyone who annoyed me. I then played croquet with birthday flamingos.

But those moments were few, mainly past, and far between. I mostly remember feeling nervous and flustered – and speaking too quickly – when called on to speak. I remember class debates where, by the time I figured out what to say, the moment had passed.

So I joined Toastmasters to work on all that.

And not to go all Toastimonial – but it worked.

You also get feedback from everyone in your club on every speech you give. What I learnt there? Keep it simple. Pare it down. And the stuff I obsess over? Not the stuff anyone else is really noticing.

In short? It really taught me that public speaking ultimately isn’t about me. It’s about the audience. Just realizing that helped me overcome some of the nerves.

What I also remember about Toastmasters?

The diverse group of people from my community that I met, who I never would have met if I hadn’t joined Toastmasters.

Really, I think some of what I love about blogging is similar to what I loved about Toastmasters.

It’s a group of people coming together, in a welcoming environment, to share their stories, and work on their personal goals.

This past Monday, I shared a table with three other former members I remembered fondly, not only for their support and honest feedback, but for their different perspectives and what I learnt from their speeches.

I also got to chat again with two of the club founders – Bob and Nancy – who are those unique people in every community who keep groups like these alive and going because they honestly believe in them and sincerely want to help others grow.

I got to catch up (a little, she was working the room) with Julie – who will be taking over as club president. She started when I was there, so it was great to see her again and know she’s taken on leadership roles and is helping others.

I got to wave, via Skype, at Carl, who was the person who very effectively recruited me, and got me onboard with the whole Toastmasters “thing”.

On Monday, I also quickly got re-emerged in Toastmasters’ lingo as people tossed around terms I once knew, but quickly caught up with again.

As people chatted to and around me about awards – CC, CL, ALB, ACB, ACS, DTM …. and which clubs they were/had been members of, which level they had “gotten to” in district contests, it all flooded back to me.

For any fellow Toastmasters reading, I am a proud CC, CL, ACB, and ALB (Competent Communicator, Competent Leader, Advanced Communicator Bronze and Advanced Leader Bronze). I give a nod to all Distinguished Toastmasters (DTM). Well done and be proud.

As for my Toastmasters journey? I got what I needed before throwing in the Toastmaster towel at six months pregnant.

Of course, before leaving, I gave an interview, for a fellow member’s project, on how I expected labour should take 5-7 minutes – within Toastmaster Speech Guidelines.

I’d also once run the Humorous Speech Competition gauntlet, winning club and area contests before finishing second at Division level with what I still think is a piece of speech-writing for audience perfection on how the Running Room is a cult (delivered to a Toastmasters audience). For the record, I’m not still bitter about losing to the woman who spoke about a trip to the dentist and mimed a root canal.

In any event, it was an interesting “history repeats itself moment” as I compared it to losing at 11-years-old at the Legion speech competition with my “Queen of Hearts” speech to the girl who talked about pets with earrings.

But getting back on point, Riverside Toastmasters helped me rediscover my creativity, my enjoyment for storytelling, and my enjoyment of writing the speeches, as much as telling them. That I started a blog shortly after giving birth (lasted nine months – RIP my BlogSpot blog), so as to keep connecting and telling stories, is probably telling of what I was missing once I left.

Monday’s anniversary let me enjoy those memories and catch up with a group of likeminded people who genuinely want to learn to better communicate, tell a story, and help others do the same.

And Toastmasters knows how to entertain.

As we finished dinner, they invited Oren Weintraub, the District 61 (that would be “us”) speech competition winner (in from Montreal, I believe) up to deliver his winning speech that he’ll also be delivering at the 2015 Toastmasters World Champs in Las Vegas this summer.

He admitted to being a telemarketer AND put my Running Room speech to shame and I STILL liked him.

I mainly liked him because he left me with something to think about.

He talked about “Vent Buddies” (aka Bitch Buddies) and how venting is just releasing your aggravation onto the people you care about and so, ultimately, maybe stop doing that and just let it go. Because there is no peace without inner peace.

I remember coming back to work from my second mat leave in a similarly Zen frame of mind. I’d even hand out advice (to crying co-workers) to the effect of:

That woman was just a complete bitch to you and that was completely inappropriate and you did nothing to deserve it.

But that’s more about her insecurities than you. And YOU control how that makes you feel, so don’t let that one person impact how you are going to view your day, your job, yourself, or your professional competency today or going forward.

I miss that “Just Back From Mat Leave Louise” and there were many times in the past year I could have used the same advice.

There were also many other “moments of clarity” on Monday where I jotted notes on my phone about how groups like Riverside Toastmasters succeed and continue for so long because there are role models in that club, and in the organization, invested in making it work.

That if a community group comes together with the right leadership, the right mentoring, agree that what they are doing is worthwhile, and commit to DOING IT, they create a strong and invested community, and one that helps others grow.

It was an uplifting message. And one I was due for a reminder on.

So with that said, cake?

Have you been involved in community groups that have had a big impact on you? Why? What made them different? Let me know!

2 thoughts on “Building Confidence and Leaders”