Well – in case Lizzi thinks that friendly reminders don’t work – I was on the fence about doing a thankful post this weekend.  But then my kids woke me up an hour early; so there was a free hour.  The funny post I was pondering didn’t really work out.  And then I went to Twitter and found this poke:

So here I am.  Working on my attitude of gratitude with Lizzi from Considerings and company here:

So here we go!

My 4-year-old offered to make me breakfast this morning.  She then proceeded to get my cereal out; asked me to get a bowl for her (they’re too high); then poured my cereal for me (without spilling it all over the floor).  It was pretty awesome.

We’re hosting Sunday dinner this weekend, which is always a large (and expensive) undertaking.  That said, thankful for family; thankful for my very helpful husband who pitches in and cooks and cleans (and is busy smoking goose jerky at the moment for us all to sample tomorrow); and VERY thankful that my parents generally host US every Sunday.

Thankful (again) for my daycare provider.  I’m cooking dinner last night and my 16-month old is toddling around the kitchen area.  We’d taken her boots off on the kitchen when we’d gotten home earlier because, well, that’s where she was by the time I’d sorted out groceries and her big sister, so they were still just kind of strewn on the floor beside her hat because I hadn’t gotten around to cleaning up.  I then watched as she picked them up and took them over to the boot rack at the front.  She then came back for her hat and brought it to the front and put it on her diaper bag.  She also now routinely puts things in the garbage when she’s done.  Given that sort of, well, order, doesn’t come from our end – I’m going to thank our daycare provider.

Thankful for my parents.  They went on vacation and came back with new bathing suits for both of my girls – which were a) beautiful and b) needed.  My eldest might not be able to back float yet and so will be a Salamander again next session (it was report card day at swimming lessons this morning) but she looked really sharp trying.

I’m thankful for the playcare at my gym.  I take my kids with me to the gym every Saturday morning and they play while I work out.  They love the playcare and have a blast.  And I get a solid 2 hours to myself.  Bliss all around.

I’m thankful my eldest is starting to make it through the night “dry”.  We’re all looking forward to retiring the overnight pull up.

I’m thankful that my eldest is really starting to pick up and use French more.  I’ve mentioned before here that she goes to French school because my husband is French.  Anyway, back in September at “Meet the Teacher” night all the parents got a … I think the polite word is “presentation” while the more accurate one might be “lecture” from the teacher about the list of things we should be doing to help our kids succeed.  (As an aside, if you ever want to feel inadequate, become a parent).  Along with practicing pincer grip and pencil holding, cutting with scissors, number and letter recognition, getting dressed by themselves, buying a big enough school bag and a small enough lunch box so they can pack it themselves without losing their shit, etc…. was also this gem: If you child isn’t speaking French in short sentences by November it will impact their future learning.  No pressure.  Now off you go and ensure their success!

I’m exaggerating.  Slightly.  But despite having spoken to her since birth in both languages and sending her to a full year half-day French preschool we weren’t there yet.  So we upped the ante again at home.  Anyway – at Parent-Teacher interviews they said she’s progressing nicely, showing more interest and understanding in activities; and speaking more in French – as well as asking how to say certain things in French.  So happy all ’round on that point!

I’m thankful for the idea from the Wakefield Doctrine last week about being able to “skip” a few thankful numbers – should one feel so inclined.  I’m exercising that option here.

I’m thankful for the adults at my daughter’s school.  I wrote last week for my TTOT post about my daughter getting picked on by older kids on the bus.  We had spoken to the bus driver after the first time, but it happened again, so I wrote the school, describing the incidents and action taken to date and asking that they do something.  Well, the vice-principal apparently intervened and spoke to the bus driver again. My daughter now sits right at the front and they make sure the kids who pick on her don’t sit behind her.  So far so good.  So I’m thankful they intervened quickly and put an end to it.  We asked the teacher about it at the parent teacher conference this week and she thanked us for letting them know because now they can ensure it doesn’t continue.  I felt heard and that they addressed the issue.  So very thankful – yes.

Monday is Remembrance Day.  So I’m thankful for the many who came before me and especially to those who gave the ultimate sacrifice.  I have family in the armed forces and who are Veterans and I’m thankful they are healthy and well.  I wear my poppy to honour the service of all those in our armed forces.  Thank you. 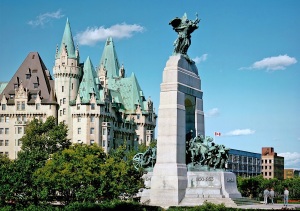 22 thoughts on “Remembrance and Thanks”