So this week I’m thankful I got to the weekend.

It was a long week.  And it’s going to be a long weekend: car shopping and another (2) birthday parties.

Somewhere in there I’m hoping to get some grocery shopping done, but I’m not holding my breath.

I did make it to the gym this morning though, because I haven’t been all week (dammit).

So, even though I’m pooped, I’m linking up for Lizzi’s Ten Things of Thankful Hop, because I figure when feeling less than awesome about life is when you should most do this, right?

I’m thankful for a new and hopefully fulfilling volunteer opportunity.  I’ve been struggling a bit recently with trying to figure out how life all fits together at this stage – ie: how there’s time for kids, career, relationships, personal fulfillment and sleep.  I’ve always done volunteering; believe it’s important; and so have kept it up on a slightly scaled back level since I’ve had kids.  That said, not all volunteering is created equally, so finding the right fit is important.  I think this one will work.

My eldest’s glasses got obliterated at school on Monday.  No note. Just came back to us in her bag in bits and pieces of awesome.  Three hundred-dollar prescription glasses destroyed and a nice note about how we’re talking about Valentines and the letter “V” this week.  I asked my four-year-old about it and got four vibrantly different and creative stories (after 3-days of repeated inquiry I am now going with Alexandre “accidentally” stomped the crap out of them during nap time.  My daughter may or may not have been asleep during the incident and may or may not be telling this from first person perspective).  In any event, she did not appear traumatized, so I was thankful for that.  After I asked, the teacher called to apologize and explain that she missed what happened and, upon inquiry, the kids clammed up and said nothin’.  But I’m thankful she called.  I’m also amused and thankful for the message from my daycare provider the following day (first of about two weeks she’ll be glasses-free as we get them replaced) about how my daughter got in trouble on the bus for “hanging out in the back” with the older kids and running up and down the aisles.  Day one no glasses and she’s chillin’ in the back of the bus with the big kids!  My first thought was I better get the glasses replaced quick or by the end of the month she’ll be skipping class to smoke behind the portables.  My second thought was that at least we appear to have moved well beyond the bullying issue on the bus and I’m thankful she’s obviously comfortable in her school surroundings now.

I’m thankful for Olympic fun.  We were at the grocery store last Sunday and got to meet Katie Weatherston, a member of the 2006 Olympic Gold Canadian Women’s Hockey Team.  Some version of this picture is apparently on this cheer wall.  But for the life of me I can’t find it.  In any event, Go Canada!

I’m thankful for fun TV and movies coming soon.  For me?  This one:

Season 2 of House of Cards is on Netflix Feb. 14! Which I think settles what I’ll be doing for Valentine’s Day.

For the kids?  I’m pretty excited about this one coming out of the vault on Feb. 11:

I’m thankful that my dreaded Friday after work shopping trip for gifts was made so much more pleasant by the excellent customer service at Laura Secord.  The woman who helped me there was fantastic.  It was everything that customer service is supposed to be.  She made the entire exchange pleasant; took the time to listen to what I needed; suggested good alternatives; and was just generally great.  After that, I was then equally thankful to the woman ahead of me in line to pay at Toys ‘R Us who told me I could pay in electronics.  By that stage, all I wanted was the fastest way home and she was kind enough to help!  It’s also a life hack I plan to remember when I next shop there.

So here’s my pretty much weekly homage to my daycare provider.  I’m thankful for the fun activities she does with my kids.  Here’s the collection of crafts she sent home this week that my youngest did.  Check out her (and by her, I think I mean my daycare provider’s) mad fine motor skills! 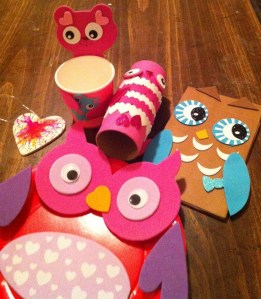 And here’s my other weekly homage on this hop: this one to my mother.  I am thankful my parents are back from holidays and that my mother is again available to babysit.  She was there when I had to work late on Wednesday; and babysat again today so my husband and I could finally go out and ….

So I’m also thankful that headache is over.  We bought a 2010 Mazda 3.  We pick it up Thursday.  Collective sigh of relief.  Beep Beep ‘n Beep Beep YEAH!

I’m thankful that I lost a couple of pounds again this week, which was my second week back on Weight Watchers.  I’m now only a few pounds off from my goal weight – so I’m pretty happy about that.   I was also thankful that they were showing Olympic Figure Skating while I was on the treadmill at the gym this morning.  Watching that athletic prowess is quite effective motivation to keep exercising.  Also, if I hadn’t been watching, I would have missed this AMAZING performance by 15-year-old Julia Lipnitskaia from Russia:

You can also click here to check out her spins!

Earlier this week, this showed up in my WordPress notifications and made me smile:

Apparently I’ve received 500 “likes” since I started blogging.  So keep clicking that there “like” button at the bottom of my posts.  It makes my heart smile and validates my (online) existence.

I’m thankful for Annie Brocoli.  This is her:

She’s a big deal with the French Canadian kiddie set.  We found this DVD at a garage sale last year and my daughters were mesmerized by it.   Then it got scratched beyond repair.  Yesterday, I finally made it out to Librairie Du Centre (sort of local French bookstore) in my quest for French Valentines day cards for my eldest for school (more on that in a second) and got this replaced.  My daughters were both thrilled to see it again and watched it happily this morning.  So I’m thankful I found that.

Where I almost failed was in finding French valentines.  I looked all over for these last year for my daughter’s French preschool and failed (ie: pharmacies, Wal-Mart, card stores etc….).  I did find some that were bilingual in the pharmacy this year, but they came with lollipops and my daughter’s school is un “école santé” (a healthy school) so no candy allowed.  Given all this, I figured I’d make a special trip out to the French bookstore, which would surely have some.  The school spends a lot of time sending us home reminders about speaking French; tips to encourage speaking French at home; French activities around Ottawa; and about how they are a Franco-fière (proud) environment and only speak French at school.  As a note, I’d have to say the approach is working, given my 4-year-old is now chatting away happily in French at home (about how any number of things we eat are “junk food” and so not allowed at school).  So, given I wanted to honour and foster this (and not get a scolding note home if I had the nerve to send English valentines) I figured I’d make the extra effort to get French cards.  But the only one’s they had were in the middle of a Scooby Doo book!   And that wasn’t enough for a class!  The clerk explained that French valentines are actually really hard to find and they’ve tried to find suppliers.  I’m thinking there is a business opportunity out there for an enterprising card-maker.  Just sayin’.  Then the clerk explained her kids usually make their own.  Given I was already there, I just bought two Scooby Doo books.  Sigh.  But done!  Next year I’ll take a road trip across the bridge to Gatineau, Quebec and try my luck there.  But for this year, I’m thankful I was able to respect the “French only” community that is my daughter’s school. 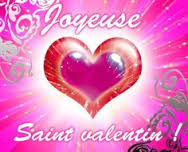