I’m drinking a lovely glass of Shiraz; after a productive day; while my husband watches our kids and the neighbour’s grandson as he preps our steak dinner (which he spontaneously decided to make) on the barbecue.

What’s that, like four thankfuls already?  Apparently coming at you live from the Twilight Zone of AWESOME I came home to discover this afternoon 🙂

Nah.  They don’t count. Yet. The featured acts in that intro deserves a bit more pomp and ceremony and description and so I’ll weave them into the storyline of my thankfuls for this week as I link up for Lizzi’s Weekly Weekend Ten Things of Thankful Hop over at her lovely blog Considerings.  Be sure to check out her spiffy new banner.

I am BEYOND thankful that school’s out for the summer (thankful 1).  Friday was the last day of kindergarten for my eldest.  So she (we – shall we be honest) have survived the first year of school.  I won’t go into any more details there as I plan to do a full post on it in a couple of days.  Let’s just say here’s to no more school lunches and rushing to make the bus for two months.  I’m also thrilled my daughter will get to spend more time with her sister and her friends at daycare.  Bring on wading pool season!

I am thankful for playcare at my gym (thankful 2).  I TOTALLY went to the gym today; dropped my kids off at playcare and ….

…. studied for my macroeconomics exam in peace for two hours.

In case you are new to my blog, or have missed the random and sporadic references I have made over the last year to this specific albatross of my life, I signed up LAST JULY to take Intro to Macroeconomics via distance education through the University of Athabasca.

You might be asking why I would do this?  Well, it’s part of my learning plan for work.  There is a stream of employment in the Canadian Federal Public Service for policy advisors known as the EC stream. EC for economics.  The one social science I avoided during both my social science degrees.  And basically the stream I’d like to end up on the higher end of, if I don’t end up in management.  So I figured it would be …  professionally advantageous … to at least get the basics.  I took micro while pregnant with my now almost two-year old.  And I’m now FINALLY finishing up macro – after discovering life gets a bit … busier with two.

It SHOULD have taken six months.  But you can buy up to three two month extensions.  Which I did.  Because, well, life got busy.  But it’s now crunch time baby!  Final exam is June 30.  The last possible day I can take it without flunking the course.  I am beyond thankful that, whatever happens, it is almost OVER (thankful 3).

I’m guessing this isn’t what gym playcare was intended for, but MAN was I productive.

And check out my study area!

Sun; sunscreen; coffee; sounds from the pool.  And otherwise?  Peaceful, natural silence.  If that doesn’t motivate you to get through three chapters of macro, I don’t know what would!  And then I got to go pick up two happy kids from playcare.  One of which greeted me in full Snow White garb (my youngest).  I got suspicious when my eldest then offered me an apple…

I’m happy for little things that make me smile (thankful 4).  When I was at Target three weeks ago buying the most recent volley of birthday gifts for kiddy birthdays and greeting cards for all occasions (birthday, Father’s Day, end of school year Thank you Teacher! etc), I bought myself this notebook to prep for my final exam for macro.

Plain ones were about $2.00 more expensive.  I’m not sure what it says that this was the cheapest notepad available.  But that’s a MICROECONOMICS issue which won’t be on the exam, so frankly I don’t really care.  And I’ll give it to my girls to doodle in when I’m done.

I’m thankful for an incredibly productive day (thankful 5).  After my “morning at the gym” I got my girls down for a nap; my husband took over; and I headed off to my parents for two more hours of studying.

I’m thankful for randomly discovered treasures (thankful 6).  I went to the pharmacy on Thursday morning to buy nail polish to match a dress for an event (sidebar: which my four-year-old loved and I’ve now done her nails that colour too) and found this book:

So I understand this came out last year and I missed it.  Perhaps I was stressing about macro?  I’ll let that go Elsa-style soon, don’t worry…

Anyway, I bought it on the spot because it will make a lovely gift for someone and when I need it, I won’t be able to find it, so I’m going to store it until the right time.  It’s like Chicken Soup for the soul – Golden Book style.  You should check it out.  It made my morning.

So speaking of events, I’m thankful for wonderful volunteer opportunities with my university alumni association; and I’m thankful for fun evenings out (thankful 7).  This Thursday, I had the pleasure of joining the Carleton University Alumni Association Table for the Ottawa Business Journal Top Forty Under Forty to cheer on all our Carleton Alumni recipients of the award.  It was a great night and congrats to all the winners.

A great event #ott40 Congrats to all winners – and the @CarletonAlumni winners including our CUAA president Jay Nordenstrom! Go Ravens!

I’m equally thankful for fun dinner conversation (thankful 8) which led to discovery of YouTube fun.  I give you “This is a Trent Reznor Song”.  Documentary-like accuracy.  And it’s very awesome.

I’m thankful for other fun and interesting things discovered this week on the Interwebs (thankful 9).

I noticed great posts from two bloggers I follow.  This one from Fit Mom and Full Plates suggesting a documentary I’m going to track down once I get out of macro study mode called “Fed Up” about the obesity epidemic and this one from Family.Work.Life. on the realities of the cost of daycare.  I also noticed they were both on Top Mommy Blogs, which I remember from my previous blog life where I was listed on Top Baby Blogs when I spent about 10 months baby blogging with my youngest back in 2009-2010.  As an aside, I’d note that Bringing Up Madison – whose currently ranked #1 over there – is a lovely blogger, and one of the first to ever say hello and comment on my blog when I started out this time around, so while I hadn’t visited her recently, I was pretty thrilled to see she’s not only happy, but thriving out there in blog land.

All that to say, I’ve put in my application over there for listing.  Apparently it takes “1-14 days” and if you click this button to the left from my blog during the approval process it speeds up their decision to list me or not.  Just sayin’.  And thanks much if you do.

And if I don’t make the cut?  Well, we’ll just never speak of this again.

Moving right along to the stunning conclusion of this week’s list.  I’m thankful for spontaneous family dinners where I don’t cook (thankful 10).  I hinted in the intro – and yes – tonight my husband made steak and potatoes on the barbecue.  And he bought wine. 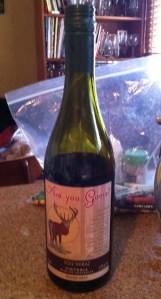 This wine – which I kind of wish he’d found a few weeks ago when I posted about my complete lack of game.

But the dinner was lovely.  He cooked the steak well, got caesar salad (I’ve been on a bit of a crazy caesar salad kick), and got all the fixings for baked potatoes.

All in all a great meal.

And then after dinner?  We dance partied with the girls.

I asked for requests and my eldest immediately asked for Madagascar’s I Like to Move It.

Then she assigned roles. Daddy was the lion; little sis was the zebra; I was the giraffe.

Her?  The role of choice: the hippo!

I love the minds of young kids.  She was the awesome girl in the movie.  End of story.

So we hooked my iPhone up to the speakers and danced to this on repeat:

After that we branched out into some Barbie and the Popstar.  Then I made it all about me and played the original Real to Real I Like to Move It (the one I line danced to in 1994; I’m not sure they noticed the difference) and Cyndi Lauper’s Girls Just Wanna Have Fun (from which the Here I Am! favorite tune from Barbie and the Popstar liberally samples – my four-year-old was mainly interested in why Cyndi was wearing pants at the start of the video rather than a dress); then moved on to Legally Blonde’s Perfect Day (also used in Barbie and the Popstar).  I like to think of this as the first of many … musical … “history” (?)  lessons.  It was a soft lob well received.

So that’s my thankful this week.  By this time next week I expect I’ll be a “Good God I’m about to write a multiple choice first year university level exam and I haven’t had enough time to study” ball of nerves.  I hope to post, but if I do I will not be held responsible for any of the wacky stuff that may come out due to stress … at only having a year … to prep for a first year undergrad multiple choice final exam for a course that’s generally four months long.

I mentioned the kids, right?

Whatever.  Until then, like Cyndi sings, let’s all be the ones who walk in the sun.  And have fun!  Because summer is HERE.