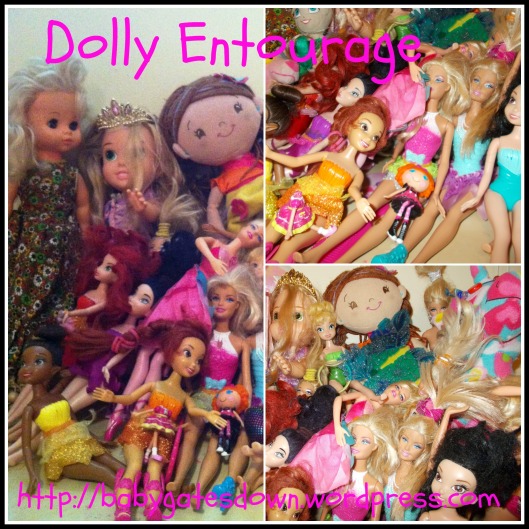 My daycare provider is on holidays this week.

Which means, so am I.

And the girls and I are hanging out staycation-style!

Having spent more time than usual with my 4-year-old, I feel that this week I have truly gotten to know her doll collection.

This is mainly due to my new role as their full-time 24/7 on-call hairdresser and stylist.

Days play out surrounded by dolls who come EVERYWHERE with us so as not to be separated EVER from the star of the show or their personal stylist.

Any activity we do is constructively complemented by “style skill-building” for me as follows:

Mom, can you do a high pony tail on this one?
And a braid for this one?
Can you put these pants on her and the skirt on her instead?
No, not that skirt. THAT one.
And a half pony-tail on her?
Can you button her dress?
Two braids on her?
She needs a bun Mommy!
No! Not like that; with some hair down!
Can you do a French braid?

Don’t get me wrong, dolls have been a feature chez-nous for a while now. So much so that I started a dolly Pinterest board a while ago to join in on the collecting fun. My girls help add to the board sometimes too:

But the scope and detail of imaginary play and interaction with them has certainly increased in the past month or so and, like sand through the hour-glass, staying home for the week has given me a front row seat to the daily dolly drama.

So yesterday, we decided to do a photo shoot of all the dolls that currently come everywhere with us (not all at once – we have had to institute a “two hands; two dolls” rule for travelling) and feature in the daily play at home.

Mom, can you do the button again?
And make this pony-tail into a braid instead?

I then did my first picmonkey collage with them because, hey! skill-building.

Given the recent increase in dolly obsession, I thought I’d give you all some quick insights, some “deets” if you will into the members of the current dolly entourage. I may update from time to time as new members join my daughter’s dolly cult. 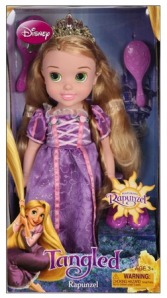 First up: Rapunzel! She is the current “Top Doll” if you will. The current favourite. My 4-year-old acquired her two weeks ago at my 2-year-old’s second birthday when a close friend was good enough to remember that preschoolers have trouble with events that aren’t “all about them” and so came with a gift for my eldest as well.

Specifically, this lady here is My First Disney Princess Toddler Rapunzel Doll. And while I hate to break it to Disney that the “my first Disney Dolly” boat sailed before my daughter was out of the womb, she is certainly a fan of this one at present.

And, well, as her stylist I have to say: awesome hair. 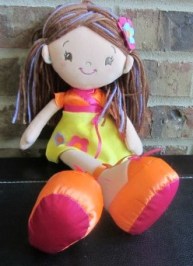 Next up, I give you Sloan, who you may have caught in the back of the group pic. I actually only just got re-acquainted with her real name while doing this post, given we’ve been calling her Leia, after my daughter’s first best friend from preschool last year, for well over a year.

Sloan is a GUND Girl.  According to their blurb, “GUND Girls are all best friends in fashion” and “Sloan is a surfer girl who loves hanging out with her friends at the beach. When it comes to fashion, Sloan has a “hippie chic” California style and she LOVES bright colors.”

While the description made the woman who once read and committed to following the advice in “Cinderella Ate My Daughter” kind of nauseous, selection was limited at the CHEO hospital gift shop the day my daughter had eye surgery (Sept. 11, 2012 – you never really forget dates like that) so Sloan joined the family as the “congrats for being a brave girl” gift and has been a favourite ever since.

Moving right along, in case you did grow up and Neverland is a blurry memory, may I re-introduce you to the NEED to believe in fairies, Tink and all her Fairy Friends. 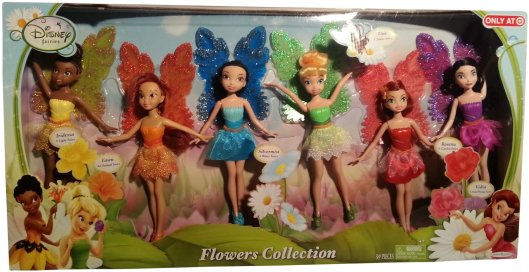 They joined our family as a unit on Christmas Day 2012 as part of the Flowers Collection.

This too can be yours in 39 fun pieces, half of which you will never see again as soon as the box is open.

While the dolls are a hit, all of their detachable shoes, wings and (WTF) separate wing holders, along with a number of their skirts have long since gone missing.

That said, these dollies as far as I’m concerned have two claims to fame: 1) They go everywhere with us and 2) Barbie’s clothes don’t fit them because Barbie has a LARGER waist.

Regardless of the awe I’m sure that inspires in everyone reading, let’s move this along and introduce, from left to right: Iridessa, Fawn (the current fave fairy), Silvermist (who I think is currently in 6th due to the fact she is routinely referred to as “the blue one”), Tink, Rosetta and Vidia.

Next I’ll give you the only dollies in the picture whose hair I cannot brush and whose clothes are not interchangeable.

Obviously my favourites, I give you the Mini Lalaloopsy Dolls! And my personal fave, in case you missed her in the entourage: Headless Lalaloopsy!

Honestly, if I ever create a blog award she features on the badge. Not even any fictional hair to braid, head long gone, and my daughter still loves her.

Forget Neverland, our next imaginary vacay will be to Sleepy Hollow.

As far as Lalaloopsy goes as a dolly brand? A quick Wikipedia search makes me love them even more: Aside from apparently being the “Tickle Me Elmo” of 2010, the brand was aimed at supporting the idea that “old things can become new again, everything can be repurposed and nothing should ever go to waste.” According to company press releases, the dolls were, “Designed to encourage a child’s imagination and creativity” and “teach important life lessons such as diversity, individuality and the idea that everything deserves a second life.”

Considering Headless Dolly here makes the cut for entry into the Entourage, and we’ve long since lost the head, I’d say my daughter has embraced that concept 100%.

Kristyn – and fun fact? Her skirt is reversible when you twist her waist – turns purple/blue. Very awesome.

And last, but never, ever, EVER, least, let’s talk about Barbie. Two faves, both featured in the collage are: Barbie as a mermaid (we’ve mis-placed the tale) from the Pearl Princess and Kristyn from Barbie in the Pink Shoes.

I’ve mentioned a few times on this blog that I was on the fence about Barbie – and whether she was a nefarious cookie-cut, “how to be a woman” influence – but having now been subjected to quite a bit of Barbie Entertainment, I am currently of the opinion that not only is that absolutely amazing marketing, but they have successfully keyed in to the wonder and imagination that is young girlhood. Sure, the imagery is pretty uniform on the physical front, but so is much of the other young (who are we kidding, all) female-focussed media out there. And the Barbie messaging is clearer and more positive than a lot of the other stuff floating about. Be who you want to be. Be a good person. Care for and take care of others. And when my daughter watches she takes it in and then takes it wherever she wants. I’m good with that. Heck, when I sit down and watch I find it motivating.

We have friends and discussions and books to show that the world has great variety. But for my 4-year-old? I’m good with a world where you can be a princess, or a pop star, or a mermaid, or a fairy.

I’m also good with a world where all your 24 dolls are there to play and help you imagine the world as you would have it be.

What about you? Have a daughter, niece, god-daughter, grand-daughter, any girl you love with a dolly entourage? Have a favourite doll from childhood? Tell me about it in the comments. Join the dolly-lovin’ club.