It’s been a few weeks since I’ve linked up with Lizzi and her co-hosts’ weekend Ten Things of Thankful Hop.

Honestly? Summer got busy with “away from computer life” and we had fun focussed on that.

But I missed you and am determined to not miss another weekend.

So here’s a selection of my thankfuls from the last few weeks:

I’m thankful for vacations and time away with family (Thankful 1).  Over August long weekend my family went with my parents, mother-in-law and brother and his family up to Chateau Montebello in Quebec. 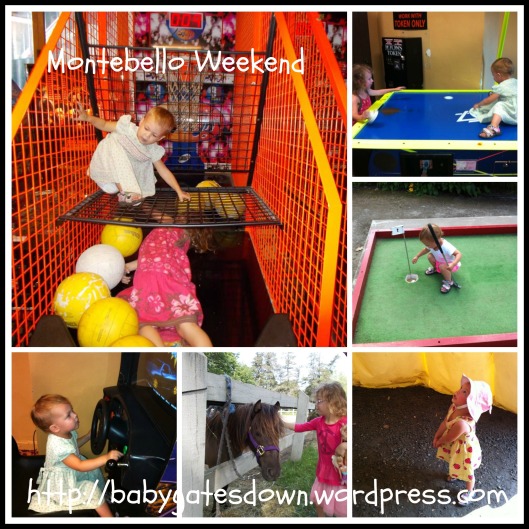 Fun at Montebello: Cheating at Basketball, learning to drive, hanging with the unicorn everyone else thinks is a pony, being awestruck in a Wigwam, cheating at mini-put and mastering the pre-school approach to air hockey.

Once my eldest got over the fact we weren’t actually going to hang with Barbie and the Popstar in the fictional kingdom of Meribella, and realized a log cabin castle was a pretty close second, she settled in and we all enjoyed a weekend of family fun.

And my youngest? Well, I’m thankful for the historical plaque outside my parents’ room at the hotel which led to fun photo opportunities (Thankful 2) like this: 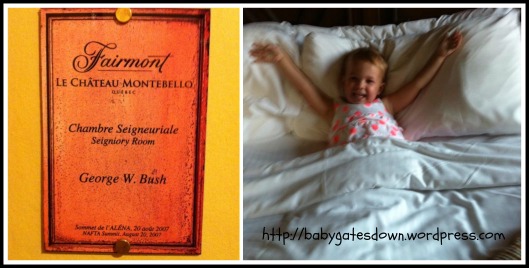 Oooh yeah! This is the life!

I’m thankful for milestones reached during downtime on holiday and to my mother-in-law for babysitting our kids two evenings in a row so my husband and I could enjoy an evening as a couple sans kids (Thankful 3):

Me, hanging with Louis XIII

Our youngest on the big kid swing for the first time.

Being at a Fairmont, I knew the bar generally carried Louis XIII and so I asked and they were kind enough to not only show me the bottle of $3000 cognac, but let me touch it, get my photo taken with it, and even SMELL it! Because at $245 a barshot, we certainly didn’t drink it.

I’m thankful for zoos located on the drive home from vacation (Thankful 4). We stopped off for a few hours at Park Omega and enjoyed/not enjoyed feeding the animals. 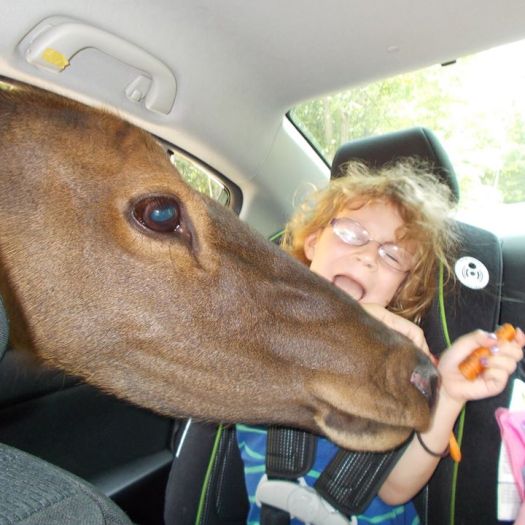 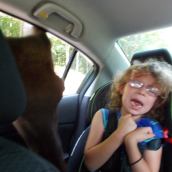 Once she figured out the “rules” all was fine.

While the weekend was loads of fun, we were happy to get home. I then had a whole other week home with the kids as our daycare provider was on holiday.  So I’m thankful for:

We had planned to go to the park, but only made it as far as this puddle…

Patio drinks, paddle boating and time at the gym (Thankful 6-8). 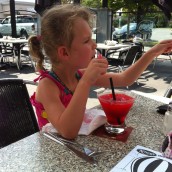 Checking out the new boxing bag at the Ottawa Athletic Club. 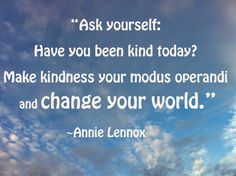 I’m also thankful for good people in the world (Thankful 9).

As I was loading the kids into the car to take them to daycare before heading off to work on Friday, a City of Ottawa worker approached me to ask if I knew my neighbour.

He’d been knocking and no one was home. He’d been trying to return my neighbour’s wallet that he had found on a street corner. He gave it to me to return, explaining he’d included a card in the wallet about a movement he was part of: RAK Ottawa. He explained he was trying to teach his sons – there were two early 20-something guys in the truck with him, so I suspect it was them – how to be good people.

The small and worn laminated card had this Annie Lennox quote; said RAK Ottawa; and #152.

I looked it up online and found a cached Facebook site for a small Ottawa group that has since gone offline, but is part of what appears to be a larger Random Acts of Kindness movement.

I’d always thought it started with the “I see dead people” kid in Pay it Forward, but quickly learnt otherwise:

It all started in a Sausalito, California, restaurant in 1982 when Anne Herbert scrawled the words “practice random acts of kindness and senseless acts of beauty” on a place mat. From there it spread to bumper stickers, quietly at first, but with all the powerful momentum of something important–calling us to lives of caring and compassion. Random Acts of Kindness, true stories of acts of kindness, was published in February 1993 and set off a chain reaction. Articles appeared in nearly every newspaper in the U.S., and hundreds of radio stations devoted airtime to the cause. Toward the end of 1993, a Bakersfield, California, professor gave a class assignment to do a random act of kindness–unleashing yet another flood of stories. The concept continues to spread, and we hope it will carry on until the beauty of simple kindness touches–and changes–us all.

I found this exact quote in many places across the interwebs, including here, which looks to have been a lovely blog encouraging and documenting RAK Attacks (as I’ve now seen them called) that has since gone dormant.

At any rate, my neighbour was thrilled to get his wallet back, nothing was missing, and a few of us had a nice moment where faith in humanity was generally restored.

And lastly? As I went back to work last Tuesday? I was thankful for my next week of holiday with the family that will be starting next weekend (Thankful 10)! I’m hopeful for some more restful and relaxed fun as we wind the summer down.

What about you? Share your thankful with the Ten Things of Thankful community by linking up with the hop.