So it’s Day 6 of our Vampire A to Z over here at Baby Gates Down.

We’re down to the last eight letters. Hopefully, if I’ve left you wanting so far, I can satiate whatever your vampire fan craving might be in the next two days.

As for me? Letter S pretty much covers that.

S is for Spike. Hands down my favourite vampire.

Welcome back to the Buffyverse. For those who’ve never seen the show, I sincerely think you should book November off work and curl up on your couch for a seven season non-stop marathon.

Then do the five seasons of Angel.

Hell, the show ended in 2003 and I still go back and re-watch seasons and pieces of it.

But getting back to Spike – there’s so much to enjoy in this character.

First? A brief history: he’s sired in 19th century England by Drusilla (another awesome vampire, but “D” was taken). In life he was an unsuccessful romantic poet known as “William the Bloody” for his “bloody awful” poetry. As a vampire he quickly becomes famous and feared – known for torturing his victims with railroad spikes and for killing two slayers. He spends over 100 years terrorizing Europe with vampire pals Drusilla, Darla and Angelus until that last fellow there gets cursed by gypsies, is given a soul, becomes Angel, and basically kills that party.

Spike shows up in Sunnydale with Drusilla in Season 2 to try to kill a third slayer and quickly establishes himself as one of Buffy’s main enemies. However, he is sometimes forced to work with Buffy against common foes and in Season 4, the Initiative captures him and implants a chip in his brain that makes him unable to kill humans. Over the next season or so he starts to work more often with Buffy and the Scooby gang, falls in love with Buffy and eventually fights to regain his soul so Buffy will love him.

So there’s the character arc (quest to be a better man for her, can he really change? …), coupled with obligatory vampire love triangle with Angel and well, he’s hot with a cool fake accent. In short? So much fun to watch him.

Speaking of fun in Vampireland? T is for the Théâtre des Vampires from Anne Rice’s Vampire Chronicles.

Readers are introduced to the Théâtre in the first book in the series – Interview With the Vampire – when Louis and Claudia, who are in Paris, are invited to attend a show.

We quickly learn that the performers are vampires, pretending to be humans pretending to be vampires. They do plays that use their vampire strength and movement and even feed in front of the audience who all believe it to be an act. After the show Louis and Claudia are invited back to meet the leader of the Théâtre, Armand (who we previously featured).

In the second book – The Vampire Lestat – we learn the origins of the Théâtre lie with Lestat, who was an actor there when human. When he becomes a vampire he buys the theatre, and keeps the human actors. However, in the meantime he discovers Armand’s vampire cult in Paris under the cemetery of Les Innocents. He challenges their beliefs, their hiding, and ultimately dismantles their entire way of existing. However, he then gives four of them the theatre (after sending the human performers away) and the Théâtre des Vampires is born.

This brings us to U which is for Underworld, the series of four (and counting) action horror movies.

The first film was released in 2003 and tells the story of Selene (Kate Beckinsale), who is a Death Dealer – a vampire warrior – bent on destroying the Lycans (werewolves) who allegedly killed her family. There is an ongoing war between the lycans and vampires and the film has a dark gothic feel and solid mythology which satisfies those who crave historic backstory and mythology (so I like).

While the movies were generally panned by critics (see the Wikipedia link above or swing by Rotten Tomatoes), it has garnered a bit of a cult following from those who like their vampires to be more killing machine, blood and violence (while in sexy cat suit), than brooding and pining for high school girls all tortured soul. A fifth movie is planned for release next year.

V brings us back to the beginning of it all. V is for Abraham Van Helsing.

I might be a Buffy fan, but I think we all need to pay homage here to the original slayer.

A character from Bram Stoker’s 1897 novel Dracula, Van Helsing is a Dutch Doctor, vampire hunter and the archenemy of Count Dracula.

He first appears in the novel when Dr. John Seward, a former student, calls him to help Lucy Westenra, whom he hopes to marry, but who has fallen mysteriously ill (because she has been bitten by Dracula).

Van Helsing is ultimately unsuccessful in helping Lucy in life and she becomes a vampire. Van Helsing, along with Dr. Seward and Lucy’s other suitors Arthur Holmwood and Quincey Morris hunt her down and destroy her.

Van Helsing then leads the rest of the characters turned vampire hunters to Transylvania where they chase Dracula down the Borgo Pass, corner him, and ultimately defeat him – slitting his throat and driving a stake through his heart.

And that, dear friends, brings us to the end of our second to last day in this little vampire marathon.

Here’s who we’ve covered to date: 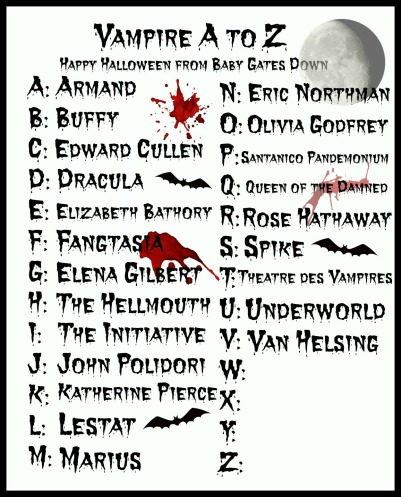 Todays photos: I found Spike via a free image search on a site doing a VERY cool character contest (which, IMO, he should obviously have won). Our theatrical vampires are from here, and those who read this far are now rewarded with the knowledge that there’s this fellow named Sebastiaan who is bringing an actual Theatre des Vampires – cabaret style – to Paris next year. You can get Selene wallpaper from here. And Anthony Hopkins (aka Van Helsing in this incarnation) comes from Theapolis Cinema.

7 thoughts on “Vampire S to V”