So when I’m not blogging, or working, or running the daycare pick-up gauntlet, or spending quality time with the kids in a “cherish every moment” totally involved way while simultaneously investing in my marriage, staying fit and finding time for me, I’m also involved in Carleton University Alumni Association. Go Ravens!

In two weeks, Carleton will be celebrating its third annual Throwback Homecoming celebration from September 16-19. For the last two years over 5000 alumni have come back to Carleton for a series of events (including football, but NOT JUST THAT). You can check out this year’s listings here.

And this year, we’re hoping to start the celebration early this Thursday, September 10, from 8:00-9:00pm EST on Twitter. There are prizes to be won and nostalgia to be had. For any Carleton alum, if you tweet and have fond memories, please join us as we remember our years at Carleton.

As for why my university years still mean so much to me – here’s some of my top memories:

I met – and got to keep – some of my closest friends during Orientation Week. I even found the brochure for my Prep Week (as it was apparently called) while cleaning my storage room this weekend: 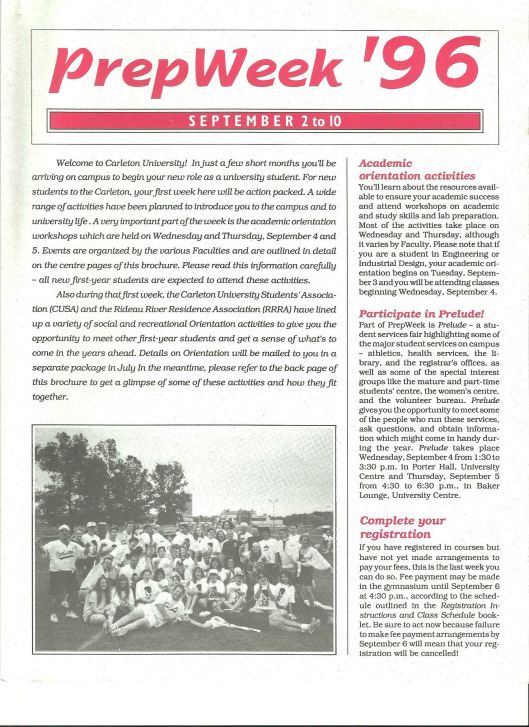 Orientation Week has just finished up last week for the first year students at Carleton this year, and I wish them well as I remember my first year. I ended up in the same frosh group as my closest friend who went to Carleton. We’d been friends since we were four and had moved from elementary, to junior high, to high school together, so it was fitting that we both ended up as Crabs (Carleton Cabana Theme!).

I met so many of the friends who saw me through university during that week. Among other things, it was a large reason I volunteered to be an orientation facilitator for my next three years in university. And years later, that first friend and another I met that week, were two of my three bridesmaids when I got married. I hope many new students are starting to cement those lifelong friendships as I type.

My undergrad student card, my first year as an orientation facilitator, my wedding day.

I swam seriously until I was about 16. At which point I realized I could train 10 times a week + land training and qualify for nationals and … go … and that was about it. So instead I quit, raised my average by about 10%, got a job at the local pool, became the editor of my high school paper, took guitar lessons and got a boyfriend. I still swam with and coached my high school team but didn’t really think about swimming seriously much until I realized Carleton had a team.

I joined. Best choice ever. In my first year I swam faster than I did when I quit and – more importantly – my teammates were a hugely important part of my university experience. Road trips; Florida training camp; 6:00am workout; annoyance at how the university paper reported our efforts. You bond. The varsity athlete experience is one I wouldn’t trade for anything.

And, in retrospect, while as a journalism student I sometimes wrote for the school paper, their chronically inaccurate reporting on our team gave me an early appreciation for how media doesn’t always get the full story.

First image from The Charlatan. Ken will always be awesome, but there was a series of … questionable reporting about the team in my first year. I finally met the writer in the student pub. If you Twitter Party with us, I’ll tell the tale. As for next photo, I’m in the parka on the left. The entire week of that Florida training camp was freezing and … character building.

I went to Carleton because I wanted to be a journalist. I had a … moment of clarity … in third year where I realized I enjoyed writing, not journalism.

While I fondly remember and stay connected with my classmates, this also leads me to another reason I love Carleton. I ended up doing a combined honours in Journalism and Political Science and did an exchange program in my fourth year with the University of Leeds in the UK where I did an internship with a Member of Parliament here and a Member of Parliament there. THAT choice and THAT opportunity is what really started me on my path to where I am now.

So I love that Carleton gave me the flexibility to do that.

And, as a last poke because I know it doesn’t happen anymore… I love that I got to graduate in the sun in Alumni Park (hip hip).

If you are a Carleton alum, please join us to chat on Twitter this Thursday, September 10 from 8:00-9:00pm. And if you are in town, please check out all the Alumni Throwback events here.

What are the best moments you remember from university days – Carleton or not? Let me know. What makes you want to reconnect with your university?