C is for Candy Land, the first board game my girls and I actually played and enjoyed.

Briefly, it is a simple racing board game currently published by Hasbro. It requires no reading and minimal counting skills, so it is AWESOME for young kids. You spin the spinner (in our version, cards were used in versions prior to those sold in 2013), move your piece and win by chance. Which has also proven a nice, equitable way to teach my kids that sometimes you win and sometimes you lose.

We are still working on not imploding when the second scenario occurs.

This is our edition:

And we just need to take a moment on the source of this photo in case you missed it.

It’s from the Candy Land Wiki.

There is a big enough fandom that there be a Wikiland of Candy Land.

Trusting that source, I am confident telling you that:

Candy Land is a children’s board game about children exploring a world made out of candy and other sweets that originally came out in 1949.

In the 1980s-1990s, characters living in this sweet world were added, and the game was accompanied by a story.

In the story, the evil Lord Licorice has hidden King Kandy’s castle, apparently in an attempt to usurp the throne. All of the characters in Candy Land are hoping for a group of human children who wandered into Candy Land to find the castle and do what they can to help .

Before we leave, the other bit I like a lot?

This is not a place for fan-fictions, or pages describing fan-fictions. There are plenty of other websites for that.

Those familiar with my blog may know I have a thing for vampires.

So I am somewhat familiar with how much is out there as far as the vampire fiction fandoms go.

The fact that there is something similar, but for Candy Land?

That just makes my heart smile. 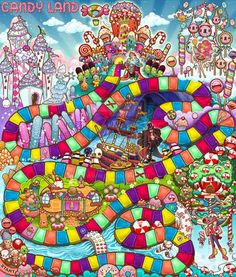 Moving right along, how about we focus on the game board?

You can research some of the characters featured on said board via the Wiki. There’s, the (apparently controversial) Duke of Swirl, then Lord Licorice, Princess Frostine, Princess Lolly and, of course you reach the palace of King Kandy when you WIN!!!

The game was designed in 1948 by Eleanor Abbott, while she was recovering from polio in San Diego, California. The game was made for and tested by the children in the same wards on the hospital (which also makes my heart smile).

The game was bought by Milton Bradley and first published in 1949, soon becoming their best-selling game. Hasbro bought it in 1984. In 2005, it was inducted into the American National Toy Hall of Fame. As a note, yesterday’s featured dolly was one of the hall of fame’s original inductees in 1999.

Getting back to me, I’d like to thank blogging for leading me to Candy Land.

I’d never played it as a child.

But ABC Life Literacy Canada ran a contest a couple of years ago to tweet literacy photos and I tweeted this:

My prize for such an awesome tweet was a series of board games including Candy Land.

While we were also gifted Monopoly, Life, and Scrabble Junior, Candy Land was by far the favourite. Given that, I feel I need to leave you with a last nod to things girly and candy because I can’t get it out of my head: