Okay, so let’s get back to JUST US GIRLS!

P is for Pink.

Now, speaking as a mother of two young girls, I can certainly tell you how HARD it is to find stuff in pink for my girls.

Am I right or am I right?

Despite efforts to find clothes and toys in other shades (really, my youngest looks better in blue), with two young girls in the house, there is A LOT of pink.

Given how much of a given it is now that “blue is for boys and pink is for girls”, I remember my surprise when I read Peggy Orenstein’s 2011 book “Cinderella Ate My Daughter” and discovered how ’twas not always so.

Orenstein dedicates a full chapter to pink and provides the history and research to answer the question: “Why has girlhood become so monochromatic?”

Briefly, starting around pg. 35, she explains how the pink explosion is a relatively new phenomenon.

Pre-washing machines, all babies wore white as a practical matter, since the only way of getting clothes clean was to boil them. What’s more, both boys and girls wore what were thought of as gender-neutral dresses.

What’s more, when nursery colors were introduced, “pink was actually considered the more masculine hue, a pastel version of red, which was associated with strength. Blue, with its intimations of the Virgin Mary, constancy, and faithfulness, symbolized femininity.”

She went on to point out how this likely explains the early Disney heroines all sporting blue and how it wasn’t until the mid-1980s “when amplifying age and sex differences became a dominant children’s marketing strategy, that pink fully came into its own.”

As a note, my two daughters helped me put together this princess collage and, once I’d explained what we were looking for, quickly pointed out that Elsa wears blue, as do other “new” princesses.

But, the point still stands that pink wasn’t the default girl colour until the latter part of the 20th century.

And while, even in the 1980s I remember pink being for girls and, indeed, discussed in my B is for Barbie post my love for my Pretty & Pink Barbie, it seems to have picked up steam in the space between my girlhood and motherhood.

Currently, it seems very much a piece of what you NEED and what helps DEFINE being a girl.

Friends of older girls talk of their daughters going through “pink rejection” phases.

Looking at the decidedly pink tint to our home at present, I am almost hoping that phase hits here at some stage.

Then there is the part of me that doesn’t want to box it up quite like that into a Love Pink / Hate Pink “thing”.

Because it’s just a colour.

As they get older, I’d like my girls to see it that way. Appreciate and understand some of the baggage and then decide if they like it devoid of that gendered, mass-marketed “be a certain way” push that floats in the undertow in any toy or clothing store where you can quickly find the girls section based on the rose-tinted hue of that part of the universe. 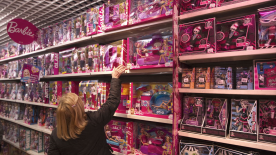 Any given toy store.