Who am I kidding?

When is there ever just ONE ant?

I stopped the bedtime routine abruptly – complete with half-naked toddler as I was en route for a Pull-up when I discovered said ant – and turned my attention to the hallway floor.

I then saw a second.

I followed where they were coming from into the bathroom and found four more scurrying across the floor there.

I abruptly killed the seven found to date and continued my inspection. I lifted a towel left discarded from the floor and discovered a group of them lugging the remains of my kids Oreo snack from the previous night away in huge crumb size chunks back toward the floor boards and what I can only assume was about to be one hell of a buggy party complete with CAKE.

Richard Bernal Illustration – from Publications International, Ltd 1993 Sing With Me – The Ants Go Marching One By One. Image links to source.

I clearly remembered my girls eating them in the bathroom the night before.

Because I just wanted them to go to bed and one last Oreo each is what stood between their tooth brushing, bed and MY FREEDOM.

Apparently I then neglected to sweep.

If I hadn’t been so freaked out by bugs in my bathroom – the first time we’ve had any  in our house in eight years – I would have been impressed with the load they were managing to haul back to … oh God WHERE in my house beyond my sight were they going?

I then proceeded to maniacally clean the bathroom, killing any ant on site, spraying Lysol, starting a load of laundry with any clothing or towels that were on the floor anywhere in the bathroom, moving out of that room to the rest of the main floor cleaning, vacuuming and removing any spot of food from the floor.

My kids watched this display of manic panic – the youngest still half-naked – with interest.

Yes, just not in the house. I like outdoor ants.

They got to stay up an extra 45 minutes, so they were angelically good, and made themselves scarce, entertaining themselves.

Once I got the house in a state of clean that satisfied me, and confirmed I hadn’t seen an ant in over a half hour, I put the girls to bed.

Then I had a beer.

At which point, my mother called.

I informed her about the ants.

She was raised in South Africa.

You don’t have an ant problem.

You should have seen what we use to find in our house.

It sounds like you got them all. Just watch over the next few days, but you’re probably fine.

After my mother’s version of the Crocodile Dundee “That’s Not a Knife” speech, which left me imagining African ants sorta looking like this: 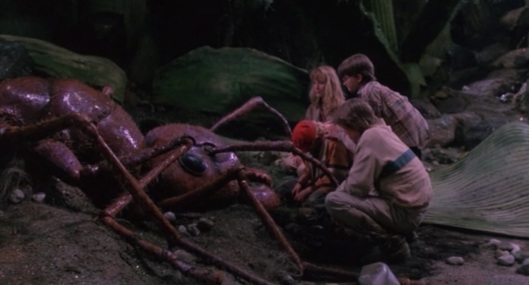 Honey I Shrunk the Kids – 1989. In the world of ant irony I watched this a few weeks ago with the kids. Still didn’t cry when the ant died. Image links to source.

I relaxed a bit.

Until I updated my husband who suggested we get ant traps.

That said, we might be good. I killed a few more throughout the night and the odd one or two more since then, but that’s it.

Then my youngest came home from daycare today with this for me.

She informed me she specifically added the ants for me.

And no. You can’t have an Oreo.